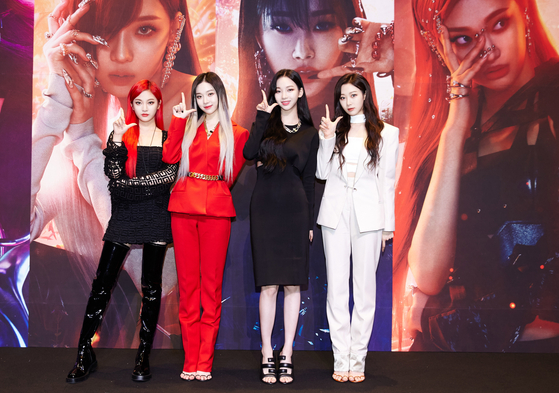 
Girl group aespa released its new single “Next Level” on Monday, according to its agency SM Entertainment.

To better explain the new song and to share their ambitions for the future, the four members gathered for their first-ever press conference on Monday prior to the release of the song in the evening.

“We are excited to present even more powerful performances this time,” said member Ningning, adding that the new track was inspired by hip hop dance.

The single is a remake of “Next Level,” which featured on the soundtrack of Hollywood film “Fast & Furious: Hobbs & Shaw.” The lyrics tell the story of how the four members are taking a trip together to reconnect with their avatars.

The group debuted in November with single “Black Mamba” and unveiled avatars for each member in order to explain the fictional world where the members came from. In the debut song, the members discover that what keeps them from staying connected to their avatars is a snake called  Black Mamba.

“The story continues from ‘Black Mamba,’ so we want people to focus on the lyrics when they listen to the song,” said Winter.

The members also shared how they feel about the fictional world they exist in with their avatars, as some fans are still confused about it.

“This idea is something we have never seen before anywhere else,” said Winter. “I’m thrilled that we have this unique world in which we meet another edition of ourselves and go on adventures together, and I am excited to see what more [we can make] to come.”

Another member Giselle said the members are preparing to do appear on programs where they are featured with their avatars. Karina said all the members and their avatars naturally make great work together as the avatars were created from the data of what actual members have shared.

The group made headlines with its debut song “Black Mamba,” as it was the fastest K-pop debut song to be streamed over 100 million times on YouTube. The feat came 51 days and 12 hours after the release of the song on Nov. 17.