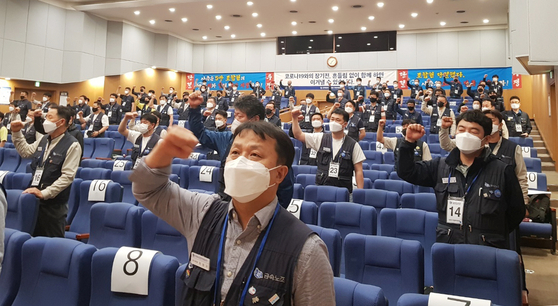 Labor union at Hyundai Motor holds meeting at Ulsan factory on May 12. [YONHAP]

Unions are objecting to an initiative by Korea’s largest automakers to invest about 8 trillion won ($7.09 billion) in the manufacturing of electric vehicles (EV) in the United States.

“Announcing such a big investment plan without even discussing it with the union is an action that completely disregards the 50,000 members of the union," unionized workers from Hyundai Motor said in a statement issued on May 17. "We don't deny the fact that maintaining overseas facilities is necessary due to tariff issues, but we have enough of them at the moment."

Kia’s 30,000 unionized workers are also opposed to the investment decision, asking the company to come up with detailed plans on how to speed up the production of EV models and hydrogen-powered vehicles at its domestic facilities.

Hyundai Motor and Kia announced last week they will invest a total of 8.4 trillion won in the U.S. through 2025 with the goal of starting production of their EV models in the U.S. by next year. The Korean automakers also said that the investments will be used to develop technologies related to future mobility including autonomous driving and robotics.

Production of EV models is directly related to job security at the auto companies as EV models will play a major role in future business.

Until now, Hyundai Motor’s Ioniq 5 and Kia’s Niro and Soul have been manufactured at their domestic facilities. Overseas demand has been met by exports. Last year, Hyundai Motor and Kia exported 7,410 units of their pure EV models to the U.S. The Ioniq 5 is made exclusively at Hyundai Motor's Ulsan factory.

The Korean auto companies explained that the latest expansion of their U.S. facilities is in response to U.S. President Joe Biden's strong support of green mobility, which is expected to drive up EV demand there.

Hyundai and Kia will be facing wage negotiations soon, and the unions are trying to gain the upper hand.

Last year, Hyundai Motor and its union agreed on the freezing of the base wage for the first time in 11 years amid the pandemic. The carmaker has experienced a major recovery this year, posting 1.5 trillion won in net profit in the first quarter, which is a 175.4 percent year-on-year jump.