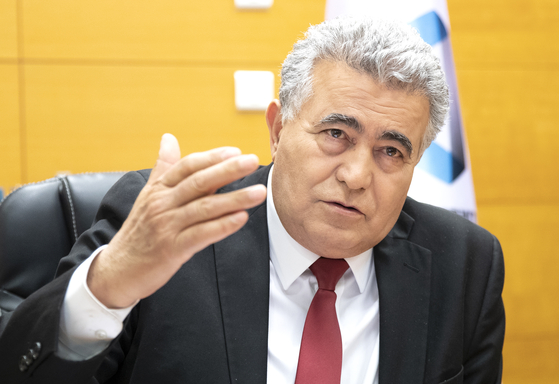 Amir Peretz, economy minister of Israel, speaks during an interview with JoongAng Ilbo at the minister’s office in Jerusalem on May 3. [LIM HYUN-DONG]


Before the recent conflict between Israel and Palestinians in the Gaza Strip, life in Israel was returning to normal following a successful vaccination program.

The lockdowns were ended and restaurants and cafes were quickly packed with customers not wearing face masks. Consumer spending recovered to pre-Covid-19 levels, and the Bank of Israel raised its GDP growth outlook for this year from 3.5 percent to 6.3 percent.

Vaccines are the best measure for an economic recovery, Amir Peretz, Economy Minister of Israel, said during an interview with JoongAng Ilbo at the minister’s office in Jerusalem on May 3.

He said the Covid-19 pandemic was similar to war — people were not allowed to go outside, they lost jobs and businesses were shut down. Israel overcame the pandemic by assuming a war footing.

Peretz mapped out the country’s plan for “building back better” and said the key is supporting high-tech industries. Recovery in the labor market is another big issue the country should solve, the minister said, as the unemployment rate in Israel is currently around 10 percent.

He recently visited Seoul and signed a free trade agreement (FTA) between Israel and Korea on May 12, the country’s first FTA in Asia. The two countries are working to make the agreement effective this year.

The interview was conducted just as the conflict was breaking out, and since then the economy of Israel has been significantly disrupted.

Israel raised its forecast for GDP growth for this year.
In January, Bank of Israel predicted 3.5 percent GDP growth in 2021. But it was then lifted to 6.3 percent. The high Covid-19 vaccination rate was the largest contributing factor. There’s one thing I learned from the pandemic. Economy and health care should go hand in hand. The two should be balanced well.

Were there any financial measures that Israel took for small- and mid-sized companies during the lockdown?
First of all, the country helped small- and medium-sized businesses with some fixed costs such as rent and utility bills. Up to 400,000 shekels ($122,000) of financial aid was available for those harshly affected by the pandemic. We also implemented the deferral of the value-added tax and discounts in local property taxes for companies that were shut during the lockdown. The country also used 50 billion shekels for state-guaranteed subsidized loans for small- and medium-sized businesses.

What are your plans for “building back better”?
It’s a long-term goal. The first step is to support digital technology. The second step would be a relocation of manpower, people from low productivity sectors to high productivity sectors such as high-tech industries. Extensive regional development projects are also included.

What do you expect from the FTA agreement between Korea and Israel?
It will be an important milestone. At least $100 million of tariffs will be removed. And it will benefit consumers. The FTA will innovatively strengthen the economic relationship and accelerate the trade between the two countries. Korea’s automobile, smartphone, home appliance and construction equipment industries have major name recognition in Israel.