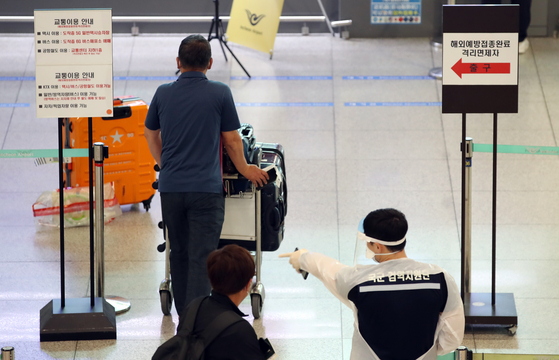 Arrivals who are vaccinated against Covid-19 pass through a special exit upon arrival at Incheon International Airport on Tuesday. Some innoculated arriving passengers are exempted from a mandatory 14-day quarantine. [YONHAP]

Under the vaccine swap, the doses will arrive early Wednesday, and be administered to people with jobs that involve lots of interpersonal contact in Seoul and Gyeonggi — a hotbed of new virus cases — from July 13. The vaccines expire at the end of the month.

"The Israeli government was looking for a place to effectively use the leftover Pfizer vaccines,” Korea’s Covid-19 Vaccine Introduction Task Force said.

“The exchange was made in consideration that Korea is equipped with an ultra-cold chain storage and has a foundation to administer all 700,000 doses, as well as considering the high participation rate in the country's vaccination campaign."

The government will send the same amount of Pfizer vaccines to Israel from September to November.

Negotiations initially began for 800,000 doses, but the number was reduced to 700,000 after Israel decided to it needed some for vaccinating young people aged 12 to 17.

"The vaccines under the swap deal are also being used in Israel, and there is no problem with the quality," Jung Eun-young, head of the vaccine introduction task force said. But Korea will conduct a safety and quality investigation before using them.

Regarding worries that the Palestinian Authority rejected a similar deal as the doses were too close to their expiration date and didn’t meet their standards, Jung said the vaccines coming to Korea are different from those that were offered to Palestine.

Around 340,000 doses will first be offered to Seoul and Gyeonggi, where they can inoculate workers in virus-vulnerable sectors with high rates of contact with other people, including transportation workers and street cleaners. Each local government will come up with its own vaccination plan and announce details later.

The doses will also be used to vaccinate some 380,000 daycare center, kindergarten, and first- and second-grade school teachers. They were originally scheduled to get jabs on July 28, which will now be advanced by two weeks. Reservations will open from Thursday to 6 p.m. Saturday.

Separately, another 627,000 doses of the Pfizer vaccine under a direct contract with the pharmaceutical company will arrive Wednesday.

Korea has been fighting a spike in virus cases amid concerns about the spread of more contagious variants. 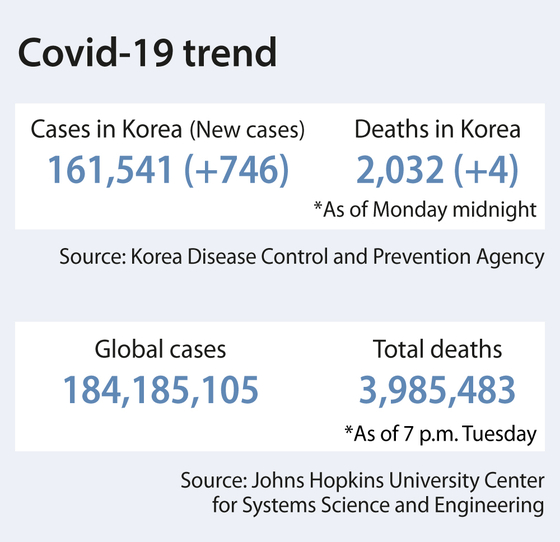 Of local cases, more than 80 percent were in the greater Seoul area.

A fine of up to 100,000 won ($88) will be imposed on violators. If a violation leads to a Covid-19 infection, the city government plans to demand additional compensation for related costs.

In addition, the government said a “one-strike-you’re-out” policy will be applied to violators of social distancing rules, who will have businesses shut down for ten days immediately when caught. The policy will be effective from Thursday.

Health authorities announced Tuesday that a total of 2,492 cases of virus variants were confirmed in Korea so far — with 2,243 people have been infected with the Alpha variant, followed by 416 with the Delta variant, 143 with the Beta variant and 15 with the Gamma variant.

There were 325 variant patients newly confirmed over the past week, including 168 infected with the Alpha variant and 153 with the Delta.

“Due to the high transmission power of the Delta variant, the number of new Delta patients in Korea increased by 30 two weeks ago, by 70 a week ago and this week it has increased by 150, doubling every week,” Health Minister Kwon Deok-cheol said.

“The most important shield for our safety is face masks,” Kwon said, urging the public to keep masks on both indoors and outdoors and refrain from having gatherings and dinners.