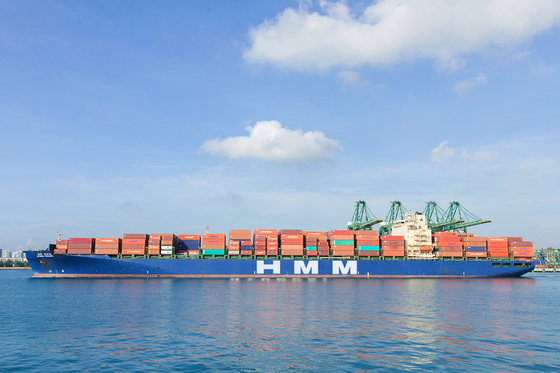 
HMM projects strong growth will continue through 2023 thanks to sturdy container freight rates.

The company's optimism is seconded by some industry analysts.

“Containership freight rates, now at record highs, may [temporarily] see corrections but are unlikely to plunge before 2023, when new vessels are scheduled to be delivered,” said a spokesperson for HMM during a conference call announcing first quarter earnings Tuesday.

HMM cited soaring demand, congestion at major ports and the impact of the Suez Canal blockage in March as the reasons behind its optimism.

The 200,000-metric-ton Ever Given blocked the Suez Canal in Egypt for six days, which delayed the passage of hundreds of vessels through the waterway.

“We see little chance of freight rates plunging in the near future given that containership demand has been driven by strong real demand, not inventory restocking," said the spokesperson.

Net profit was 154.1 billion won ($138 million) in the first quarter compared to a 65.6 billion won net loss in the same quarter a year earlier. The company’s revenue jumped 85 percent on year to 2.43 trillion won.

Shipping was one of many industries hit hard by the Covid-19 pandemic early last year. But demand for marine transportation recovered strongly in the second half of last year, especially on routes to the United States.

A researcher from the Korea International Trade Association (KITA) released a similar projection on freight rates in a recent report.

“The volume of new ships ordered in 2020 only accounts for 10.4 percent of old ships available for operation,” said Cho Sung-dae, a researcher at KITA, in a report released on April 30. “Considering that it takes around two years for new ships to be injected [put into operation], the shortage of vessels is projected to continue for a while.”

Along with the rosy outlook, a lot of retail investors have jumped into HMM, bestowing on it the nickname HMMsla – a combination of HMM and Tesla Motors, the U.S. electric vehicle manufacturer with a soaring stock price.

HMM’s shares over the past year jumped more than a thousand percent to 46,050 on Thursday from 3,750 on the same date last year.

HMM currently faces an issue: the Korea Development Bank’s (KDB) conversion of bonds into shares, which could drag down the share price.

KDB, which owns around 12 percent of HMM, could exercise its conversion rights for the company’s convertible bonds before they expire on June 30.

KDB holds 300 billion won in HMM convertible bonds. If it converts the bonds into stocks, its ownership of HMM shares will rise to 25.9 percent.

“We advise investors to keep a close eye on the issue,” said Kim Young-ho, an analyst at Samsung Securities. The analyst added that the stock could rise further if the bank does not exercise the rights.