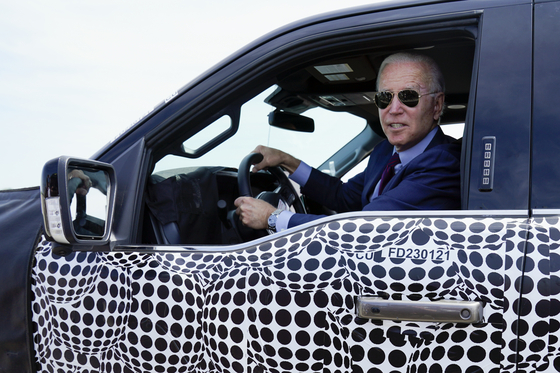 U.S. President Joe Biden stops to talk to the media as he drives a Ford F-150 Lightning truck at Ford Dearborn Development Center, Tuesday, May 18, 2021, in Dearborn, Michigan. [AP/YONHAP]

Ford and SK Innovation are signing a memorandum of understanding to form an electric vehicle (EV) battery joint venture in the United States.

The Korean battery maker has already been selected as a battery supplier for Ford's just-premiered electric F-150 pick-up truck.

SK Innovation confirmed that a joint venture announcement would be made, but did not confirm the details, which were published in a Reuters report.

Ford, the second largest U.S. automaker after General Motors, has been taking cautious but steady steps toward electric mobility. It currently has one EV model in the market, the Mustang Mach-E, and has pledged to spend $22 billion on its EV business through 2025.

The electric version of the F-150 with SK Innovation batteries will be rolled out in the U.S. next year.

LG Energy Solution and General Motors have a 50-50 joint venture, Ultium Cells, that will manufacture battery cells that will go into EVs made by General Motors. They have pledged a total of $4.6 billion to build battery factories in Ohio and Tennessee, which will together have battery production capacity of 70 gigawatt-hours (GWh) by 2024.

SK Innovation is building two battery factories in Georgia, with the investments totaling $2.6 billion. The first factory will start mass production by next year and the second by 2023. Together will have production capacity of 21.5 GWh. Batteries produced there will be supplied to Ford and Volkswagen.

Korean battery investments in the U.S. accelerated after LG Energy Solution and SK Innovation, the world's second- and sixth-biggest EV battery producers, came to a settlement early this year regarding battery technology theft. SK Innovation agreed to pay LG Energy Solution $1.8 billion and will not be prohibited from doing battery business in the U.S.

LG Energy Solution recently pledged to invest 5 trillion won ($4.4 billion) in the U.S. through 2025 to build at least two battery factories, which will add an additional 70 GWh of battery capacity.

SK Innovation, with production facilities in Korea, China, Hungary and the U.S., has an annual battery production capacity of 40 GWh. The company has said it will continue to expand in order to hit 125 GWh annual capacity by 2025.