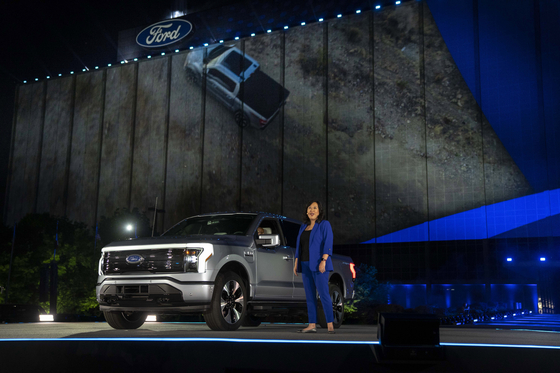 In a photo provided by Ford, Linda Zhang, F-150 Lightning chief engineer, explains details of Ford's first all-electric truck at the reveal of the vehicle at Ford headquarters in Dearborn, Michigan, on May 19, 2021. [AP/YONHAP]

SK Innovation and Ford will establish a 6-trillion-won ($5.3 billion) joint venture called BlueOvalSK in the U.S. that will be able to annually produce 60 gigawatt-hours (GWh) of electric vehicle (EV) batteries by the mid-2020s, according to a statement from the companies released May 20.


The joint venture may build two factories in North America to achieve the targeted battery production capacity, although locations are still being mulled over, according to Lisa Drake, chief operating officer of Ford North America, in a conference call.

The breakdown of the new joint venture's ownership wasn't disclosed.

"Through the JV, Ford and SK Innovation will jointly develop and industrialize battery cells at scale that are tailored to deliver optimum performance and value for our Ford and Lincoln customers," Drake said in a statement. "SK Innovation is an important partner in helping deliver batteries with better range and value for our fully electric vehicles by mid-decade."

Ford's establishment of the battery joint venture with SK Innovation comes as the American auto company accelerates its transition to an EV manufacturer. It also comes as uncertainty regarding a legal dispute between SK Innovation and LG Energy Solution on battery technology misappropriation, which threatened to keep SK Innovation out of the U.S. battery market for a decade, has been lifted with a negotiated settlement.

Kim Yoo-suk, head of SK Innovation's battery marketing division, said that "there is no remaining issue" regarding the legal dispute with LG.

"We now have a sufficient number of EVs to justify this level of investment," said Hau Thai-Tang, Ford's chief product platform and operations officer at Ford during the conference call.

Thai-Tang added that internalizing the battery manufacturing process benefits the American automaker in terms of sourcing, developing expertise on battery chemistry and driving down the price of the battery and eventually the EV.

Following the introduction of the Mustang Mach-E last year, Ford is planning to bring the electric Transit van to market by the end of this year and the electric F-150 pickup truck to market next year. They are part of $22 billion in investment the No. 2 American automaker has pledged to its EV business by 2025.

SK Innovation is building two battery factories with annual capacity of 22 GWh in Georgia at the cost of $2.6 billion. Batteries made there will be supplied to Ford for its electric F-150 pickup truck and to Volkswagen.

The latest joint venture with Ford will bring SK Innovation's annual battery production capacity to 190 GWh, with facilities in Korea, China, Hungary and the United States. 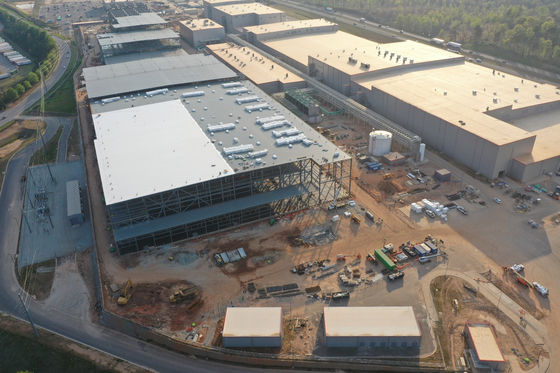