Moon to attend Medal of Honor awarding in White House

Moon to attend Medal of Honor awarding in White House 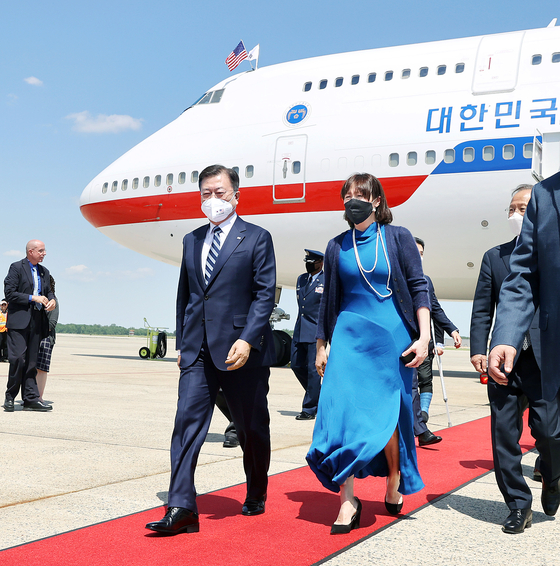 President Moon Jae-in, left, arrives at Joint Base Andrews in Maryland Wednesday and is met by Asel Roberts, acting chief of protocol for the U.S. State Department. Moon kicked off a four-day trip to the United States that includes his first summit with U.S. President Joe Biden at the White House Friday. [YONHAP]


President Joe Biden will award America's highest military medal to a 94-year-old Korean War veteran in a ceremony attended by President Moon Jae-in, to highlight the importance of the 70-year-old Korea-U.S. alliance.

Biden will award retired U.S. Army Col. Ralph Puckett, Jr. the Medal of Honor “for conspicuous gallantry during the Korean War,” said the White House in a press release, as Moon arrived in Washington Wednesday afternoon for his first summit with Biden Friday.

Puckett, a first lieutenant who had recently graduated from the U.S. Military Academy, served as commander of an Eighth U.S. Army Ranger company in a battle to seize and defend Hill 205 on Nov. 25 and 26, 1950.

It will be the first Medal of Honor awarded since Biden took office and the ceremony will be held Friday at the White House. This will be the first time a foreign leader is invited to attend such a ceremony, symbolic of the bilateral alliance and South Korea’s appreciation of U.S. troops’ sacrifices during the 1950-53 Korean War.

Puckett mounted a tank, exposing himself to deadly enemy fire, as he led a group of Rangers and South Korean soldiers on a daylight capture of Hill 205, a strategic point that overlooked the Chongchon River in northern Korea, the site of a major battle during the war.

The U.S. troops, the White House said, were “inspired and motivated by the extraordinary leadership and courageous example” exhibited by Puckett.

The young lieutenant intentionally ran across an open area three times to draw enemy fire away from his soldiers, “allowing the Rangers to locate and destroy the enemy positions and to seize Hill 205,” according to the White House.

Enemy troops launched several major attacks on the night of Nov. 25, armed with mortars, machine guns and small arms. Puckett, despite a grave injury from a hand grenade in the first wave of attacks on the hill, continued to direct artillery support.

After six waves of attacks, Puckett ordered his men to leave him behind and evacuate — an order his troops refused — according to the White House. The Rangers ultimately succeeded in retrieving a wounded Puckett from a foxhole. 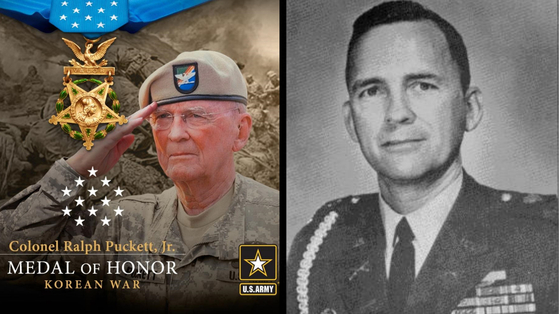 Retired U.S. Army Col. Ralph Puckett, Jr., a Korean War veteran, will be awarded the Medal of Honor by U.S. President Joe Biden in a ceremony Friday to be attended by Korean President Moon Jae-in, announced the White House Wednesday ahead of the two leaders’ first summit. [U.S. ARMY]

The White House stated Puckett’s “extraordinary heroism and selflessness above and beyond the call of duty were in keeping with the highest traditions of military service.”

The White House did not specify the nationality of the “enemy” forces in its press release.

The U.S. Army has described the Battle for Hill 205 as illustrating the change in situation that came to define Phase 3 out of five stages of the Korean War, from November 1950 to January 1951, marked by the intervention of the Chinese Communist Forces.

The Battle of the Chongchon River, which ran from late November to early December 1950, was a decisive battle in the war that resulted in Chinese victory and North Korea regaining control of areas north of the 38th parallel, forcing the retreat of U.S.-led UN forces.

The three-year Korean War ended in July 1953 in a ceasefire.

Puckett, who also served in the Vietnam War, retired from the U.S. Army as a colonel in 1971. He is a recipient of the Distinguished Service Cross among other medals.

Puckett lives in Columbus, Georgia, with his wife, Jean Martin. They have two daughters, one of whom is deceased, a son and six grandchildren.

Moon arrived at Joint Base Andrews in Maryland on his presidential jet Wednesday afternoon for his first overseas trip since the start of the Covid-19 pandemic.

Moon’s first official engagement Thursday morning was a visit to the Tomb of the Unknown Soldier in Arlington National Cemetery, where he was to lay a wreath. The monument is dedicated to fallen U.S. soldiers whose remains have not been identified, including those from the Korean War.

This was Moon’s first visit to the cemetery despite making three trips to the United States since being elected president in 2017. He was later set to visit Capitol Hill and meet with Vice President Kamala Harris.

Moon’s summit with Biden will be held Friday and is expected to focus on vaccine cooperation and Korean Peninsula issues, followed by a joint press conference. He will also attend a groundbreaking ceremony for the Wall of Remembrance at the Korean War Veterans Memorial in Washington.

Moon is expected to make a stopover in Atlanta, Georgia, to visit an SK Innovation factory, and return to Seoul Sunday.

The Medal of Honor is the most prestigious military award by the U.S. government, presented to members of the armed forces who distinguish themselves conspicuously by acts of valor at the risk of their own lives above and beyond the call of duty.