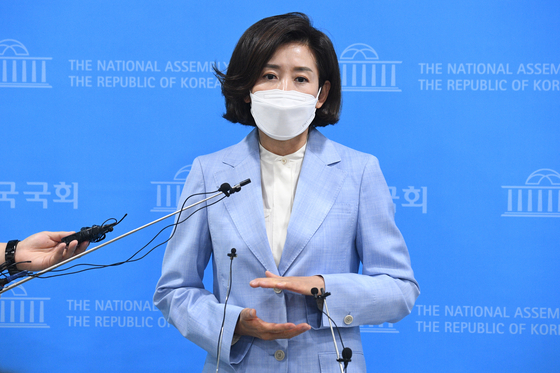 Na Kyung-won, former four-term lawmaker, talks to the press Thursday after announcing her bid to run in the People Power Party's chairmanship race. The party will elect its new chairman on June 11. [YONHAP]


Two prominent politicians of the main opposition People Power Party (PPP), representing both the young and old generations, held press conferences Thursday and announced their bids to run in next month’s chairmanship race.

Na Kyung-won, a former four-term lawmaker who served as the party’s floor leader from 2018-19, and Lee Jun-seok, a 36-year-old politician who joined the conservative party in 2011, each announced their bids in two press conferences. The PPP will hold a national convention on June 11 to elect the new leader, and 10 politicians including Na and Lee are competing for the post. 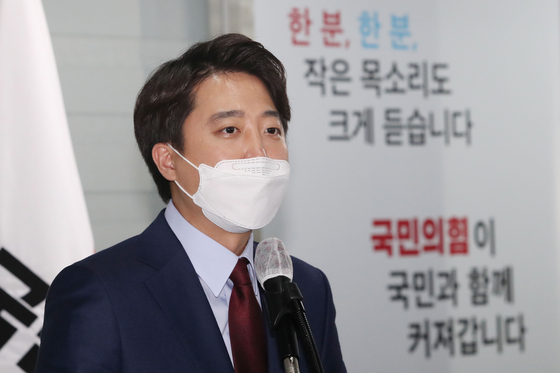 
While both Na and Lee vowed to bring a presidential victory to the party if they become the chairman, their strategies differed greatly. Na tried to appeal to the conventional supporters of the PPP by promising to recruit prominent conservative politicians for the presidential election. Lee vowed to overhaul the party’s nomination system to appeal to young voters.

“I will meet everyone who has the potential to be our party’s presidential candidate,” Na said in a press conference in the morning at the National Assembly. She mentioned former Prosecutor General Yoon Seok-youl, People’s Party Chairman Ahn Cheol-soo and Kim Dong-yeon, former finance minister of the Moon Jae-in administration, as such possible candidates. “It is crucial to communicate ideas with them and build trust,” she said.

Na also said Yoon must join the PPP to run in the presidential election because there is little chance for a candidate outside the two major parties to win. For decades, Korea’s political scene has been dominated by the PPP and the ruling Democratic Party.

She stressed the importance of the PPP reinventing itself to recruit as many prominent candidates as possible, saying, “We must do our best so that all possible opposition candidates will join us."

Na, 59, was a judge until she started a political career in 2002 to support the presidential campaign of Lee Hoe-chang of the conservative party. She won her first lawmaker seat in 2004 and scored three more re-elections. She served various leadership posts in the party including spokesperson, Supreme Council member and floor leader.

She, however, was defeated in last year’s general election. She tried make a political comeback by declaring her bid for the Seoul mayoral race, but lost the party’s primary to Oh Se-hoon, who went on to win the post in last month’s by-election.

Later in the day, Lee Jun-seok, who currently holds no official leadership title in the PPP, held a press conference at the party headquarters to formally announce his bid. The Harvard graduate started his political career in 2011 by joining the Saenuri Party, a predecessor of the PPP, when he was a young entrepreneur.

Even before his bid was made public, Lee has enjoyed high popularity in recent polls.

According to poll results announced Thursday, Lee ranked highest among the PPP politicians in the chairmanship race. The survey, jointly conducted by four polling companies including Hankook Research, showed Lee with 19 percent. Na scored 16 percent, and Rep. Joo Ho-young, a senior politician who served as the floor leader until last month, scored 7 percent.

In his press conference, Lee vowed to bring “irreversible” changes to the PPP to appeal to young voters and win next year’s presidential election.

Lee said he will introduce a new system to employ party workers. The key posts of the party including spokesmen will be open to the public, and anyone with the right abilities can compete for the jobs, he said, promising a fair and transparent recruitment system.

He also vowed to improve the nomination process. Lee said all applicants who seek the PPP nominations in any election will have to prove their abilities through standardized test scores. “To win our party’s nomination, a candidate must have basic data analysis, expression, computer and reading comprehension skills,” he said.  The party will provide education, if necessary, to produce capable candidates, Lee said.

Lee also promised to hold a more creative presidential primary. He proposed first selecting four presidential candidates and holding debates to select the final winner. “During the debate process, the voters will be able to evaluate and vet the candidates,” he said, stressing that debates will not only show each contender's reasoning but also their abilities to cooperate and qualities such as the courage to accept differences.

In his announcement, Lee made clear that a generational change is crucial for the party. “We cannot expand any further by provoking ideological competition and regionalism,” Lee said. “The only way for us to expand is by changing ourselves to appeal to the future generations.”