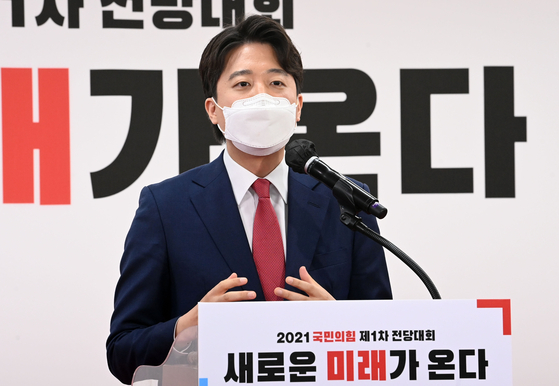 Lee Jun-seok gives a speech on Friday to accept his election as the People Power Party's new chairman. [YONHAP]


Lee Jun-seok, a 36-year-old politician, was elected the new chairman of the largest opposition People Power Party (PPP) on Friday.

Lee, a political maverick with no experience of winning a legislative election, garnered 43.82 percent of votes in the chairmanship race of the seasoned conservative party. He will chair the party of 102 lawmakers in the crucial months leading up to the March 2022 presidential election. His tenure as chairman is two years.

"Our supreme task is winning the next presidential election," Lee said in his acceptance speech. "To this end, I will create a party where multifaceted candidates and their support will coexist."

Lee said he will accept constructive criticism, but fight against old political tactics, urging PPP members to support him.

He also said the party must make strenuous efforts to become more attractive to hand down judgement on the Moon Jae-in administration. "The first change I will introduce will be a qualification test for public election candidates and a public competition of speeches and debates to recruit a public affairs team," he said.

The PPP elected the new chairman through a party members' vote and a public opinion poll. The vote accounted for 70 percent and the poll 30 percent.

Lee will work with Floor Leader Kim Gi-hyeon, a 62-year-old veteran lawmaker, to reinvent the party.

He is the first politician in his 30s to head a political party with more than 20 lawmakers to constitute a negotiation group inside the National Assembly. His major political counterparts are President Moon Jae-in, 68, and Democratic Party Chairman Song Young-gil, a 58-year-old fifth-term lawmaker.

Lee has defied the conventional image of a politician in Korea — particularly a conservative one — in many ways.

After graduating from Harvard University, Lee started a software startup in Korea and participated in an education volunteer group. In 2011, when Lee was 26, Park Geun-hye, then acting leader of the Grand National Party, a predecessor of the PPP, recruited him. 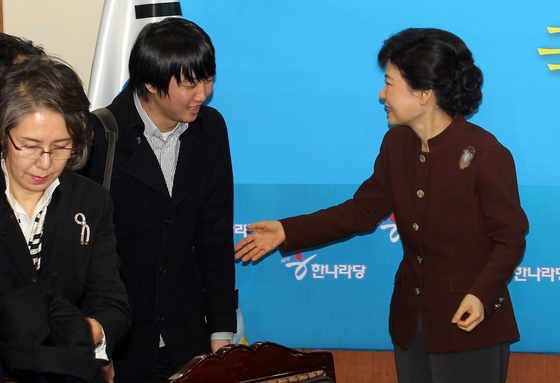 In this file photo, Park Geun-hye, then acting leader of the Grand National Party, right, talks to Lee Jun-seok, a member of the acting leadership, in December 2011.

Although he was recruited by Park, Lee has kept his distance from her after her 2016 abuse of power and corruption scandal. During the chairmanship campaign last week, Lee said, "I appreciate Park for recruiting me into politics, but her impeachment was legitimate."

In late 2016, Lee left the party to join the Bareun Party, led by Rep. Yoo Seong-min. After the party merged with Ahn Cheol-soo's People's Party, Lee served in its leadership. In the 2017 presidential election, Lee worked as part of Yoo's presidential campaign.

Lee became a PPP member through the conservative merger before the 2020 general elections. During this year's by-elections, Lee supported Oh Se-hoon's campaign to become Seoul mayor. He was the mastermind behind Oh campaign's event that offered public speech opportunities to people in their 20s and 30s who are upset with the Moon administration.

Lee is also known as a TV celebrity for his frequent appearances on many shows. He was also the cover model of Maxim magazine in August 2019.