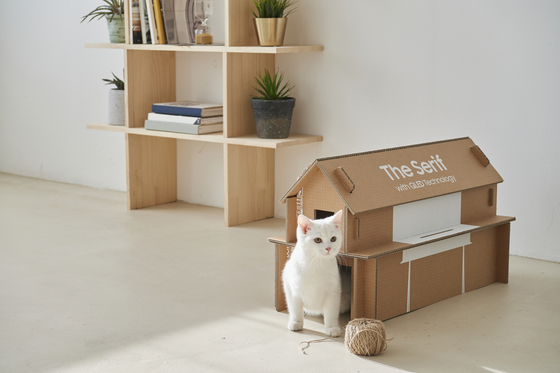 A cat house made with Samsung Electronics’ eco-packaging. [SAMSUNG ELECTRONICS]


Taking a product to market in 2021 takes more than just a production line and an advertising budget. If you want something to sell, you'd better be able to prove it's environmentally friendly.

Green marketing, the process of promoting products based on their environmental credentials, is becoming more common as consumers increasingly value products that appear to have a positive social impact.


The marketing of environmentally-friendly goods especially targets consumers that are willing to pay more for eco-friendly products or services. This green marketing is spreading fast across multiple industries, including beauty, household appliances, retail, finance and chemical.

Special campaigns, collaborations with start-ups and financial compensation to consumers are a few of the strategies taken on by companies rolling out green marketing. Some of these attempts proved successful, but others have backfired, tainting the brand's reputation.

The value of green marketing has increased following the Covid-19 outbreak last year, as it simultaneously increased environmental awareness and created more waste.

According to the Ministry of Environment, the average amount of plastic waste generated daily jumped by 16 percent to 850 tons in the first half of 2020, up from 732 tons a year earlier.

The number of parcels delivered last year totaled 3.37 billion, up 21 percent from a year earlier, according to the National Logistics Information Center.

In response to this rapid growth, the government is aiming to reduce plastic waste by 20 percent over the next four years compared to 2020 and raise the recyclability of disposed plastics to 70 percent from 54 percent.

The ultimate goal is to achieve carbon neutrality by 2050.

These government goals are further pushing companies to focus on green marketing.

"Environment, social and governance [ESG] policies are law for corporations these days," said Seo Yong-gu, a business professor at Sookmyung Women's University. "They are actively pursuing green marketing because companies that insist on sticking to their previous business practices are recognized as outdated." 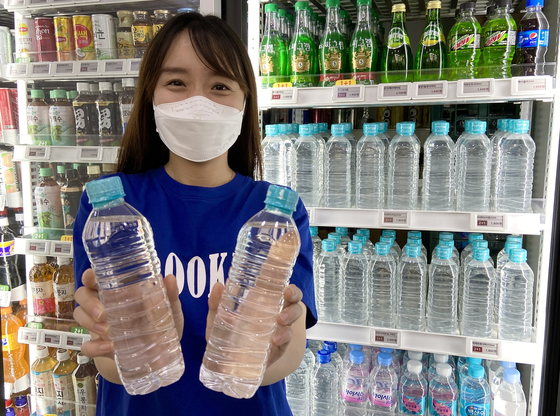 The beauty industry is trying a number of different techniques to woo environment-conscious customers.

Amorepacific, which is behind the Sulwhasoo, Hera and Laneige cosmetics brands, launched its second refill store at an Emart branch in Jayang-dong, eastern Seoul, last month.

The bottle is made with post-consumer recycled plastic.

Post-consumer recycled plastic is derived from an end product that has completed its cycle as a consumer item and would otherwise have been disposed of as a solid waste product.

"Our focus at this point is making use of post-consumer recycled plastic," said Cho Yong-hwan, a spokesperson for Amorepacific. "Cosmetics substances have a certain level of viscosity and can stain a bottle. That makes recycling difficult."

This green marketing is part of the company's attempt to appeal to the younger generation, "who have a strong will to express their identity through what they buy" explained Lee Chang-gon, a spokesperson for the beauty company.


Efforts to reduce plastic waste are also evident in the food industry.

Starting in June, food delivery platforms — Baedal Minjok, Yogiyo, Coupang Eats — will deliver disposable spoons and forks to their customers only when they ask for them.

Currently, customers have to ask not to have the disposable forks and spoons delivered.


CJ CheilJedang and Dongwon F&B are focused on reducing the use of plastic in food packaging.

Ahead of Chuseok last year, CJ CheilJedang, the company behind the Bibigo brand, launched a spam gift set that did not have the product's famous yellow plastic lid. Dongwon F&B switched the material for its gift set bag from fabric to paper.

CJ CheilJedang expanded the effort to replace product packaging with a biodegradable alternative made with polylactic acid, a type of environmentally-friendly plastic, and polyhydroxyalkanoate, a green replacement for petroleum-based plastic.

Biodegradable plastics are designed to break up when exposed to microorganisms. CJ CheilJedang has started using the packaging for tofu.

Other green marketing that is spreading rapidly in the food and retail businesses include sales of plastic-bottled water without labels to facilitate recycling.

7-Eleven on Tuesday launched its private-branded plastic-bottled water without a label, while Homeplus said it has already sold more than a million of its own version in the month following its release.

Some companies are encouraging customer to take part in green initiatives by offering financial rewards.

Starbucks Korea offers a 300-won (0$.27) discount to customers that use their own tumbler, while Oyster Able, a start-up, runs an app that gives coupons to people who separate waste by materials.

Users of the Oyster Able app — Recycle Today — scan the QR code on a specialized waste collection bin installed by the company. Users then scan a barcode stuck on the label of the plastic packaging before putting it inside the bin.

They then receive points that can be exchanged for coupons for things like milk, pizza and clothes.

Innisfree, a brand under Amorepacific Group, collects empty plastic bottles from its cosmetics products. In return, customers receive points that can be used to buy new products at the brand's store.

Financial compensation has proved to be effective, especially in recent years when eco-friendly initiatives have grown stronger.

The number of Starbucks users who use their own tumbler jumped more than a thousand percent from 360,000 in 2007 to 4.8 million last year, while Innisfree has collected a total of 31.75 million bottles from 2010 through May 20.

Similar results were seen on the Recycle Today app.

The amount of plastic collected at Oyster Able's bin at Emart's Yeongdeungpo branch in western Seoul weighed 336 kilograms in a month in 2019. This was 25 times higher than 13.58 kilograms of plastic thrown away in a standard bin that stood at the same location for a month. 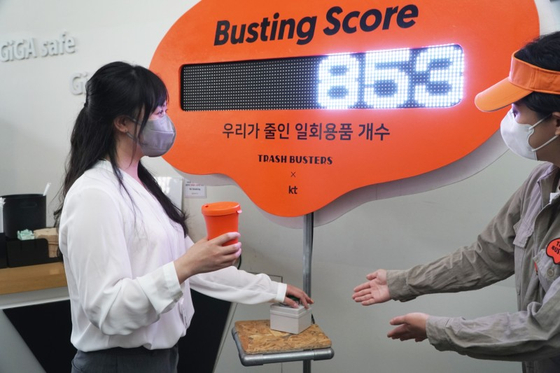 A KT employee uses a reusable cup at a cafe at the company’s office in central Seoul. [KT]

Other green initiatives include raising energy efficiency, collaborating with start-ups and launching an eco-friendly brand.

Samsung Electronics introduced a remote control that runs on solar power in March.

The remote can be recharged using indoor or outdoor lighting, or just a regular USB port if the energy from the lighting is not enough.  It does not require disposable batteries, which emit greenhouse gases when decomposing in landfills.

Some conglomerates have partnered with start-ups to boost their green credentials.

Telecommunications firm KT partnered with Trash Busters to reduce the use of plastics cups at the cafe in its office in central Seoul.

Trash Busters' primary business model is renting out bowls, cups and forks for use at festivals, but it expanded the service to other companies following the outbreak of the Covid-19 pandemic, which reduced outdoor gatherings.

Trash Busters currently supplies reusable cups to the KT cafe, collects them after working hours and then returns them the next morning.

LG Chem is hoping to make recycling easier through its partnership with start-up Innerbottle.

In March, LG Chem partnered with Innerbottle to build a system where plastic bottles for beauty products are collected directly from customers and completely recycled.

LG Chem's goal is to make cosmetic packaging using a single material to make it recyclable.

A lot of cosmetics packaging are difficult to recycle because they are a mixture of different types of materials to preserve the quality of the actual cosmetics product.

Innerbottle uses a silicon pouch inside the bottle that holds the actual product. Because the silicon pouch is what directly contacts the substance, the outer bottle covering the pouch does not need to have a special function and can be reused without additional cleaning.

The green initiative is also growing in the banking industry, where reputation plays a key role in business.


Banks are offering slightly higher interest rates to customers who create an installment savings accounts and commit to going green.

The Industrial Bank of Korea, for instance, is holding a promotional event to give a higher rate for installment savings to people who promise to buy an electric vehicle or use a tumbler. They are given an extra 0.2 percentage points to 2.7 percent in total at its highest. Those who sign up are randomly picked to receive an electric bike as a freebie.

KB Kookmin Bank gives an extra 0.1 percentage point to installment savings subscribers that do not create a paper bankbook, while KEB Hana Bank in 2018 gave prime rates to subscribers that walked more. 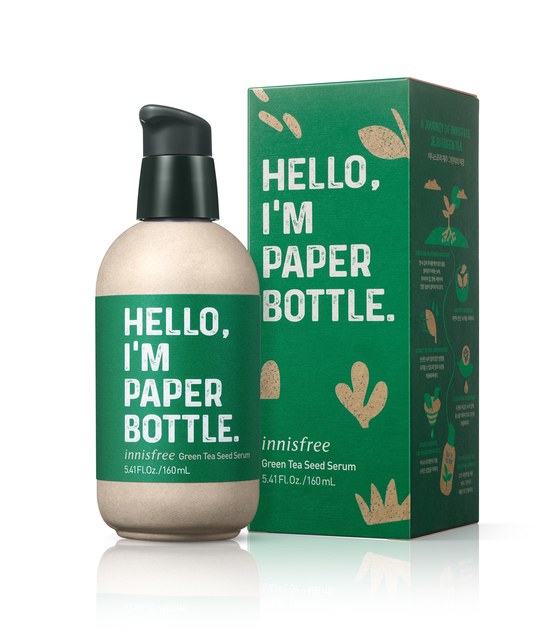 
While a lot of companies are making an effort to go green, not all of their attempts have proven to be entirely eco-friendly.

Innisfree recently faced a strong backlash for the its cosmetics packaging.

The controversial packaging included a thin plastic bottle covered with paper material, on which was written, "Hello, I'm Paper Bottle."

Some customers bought the product thinking the packaging was made with paper and were hugely disappointed when they found out that there was a thin plastic bottle hidden inside the paper packaging — even though the plastic used for the bottle was half the amount of the average used.
Innisfree had noted that there was plastic packaging on the box, but that did not help ease consumer anger.

"Innisfree went too far to promote it as a paper bottle," said one commenter online, while another wrote, "If the goal was to reduce waste, I don't understand why [Innisfree] covered the plastic packaging with thick paper."

Questions also remain over  the efficiency of alternative packaging materials in actually cutting down pollution.

The company expects the eco-packaging to reduce greenhouse gas emissions by 10,000 tons annually, considering that 25 million televisions are sold annually.

But the creation of paper also generates carbon dioxide. Producing a kilogram of corrugated cardboard creates 0.872 kilograms of carbon dioxide, according to data from Korea Environmental Industry & Technology Institute.

"Recycling itself can't prevent pollution," said Greenpeace Korea, a local branch of the international environmental organization, in a report. "Reducing its production from the beginning and prioritizing waste management are the solutions." 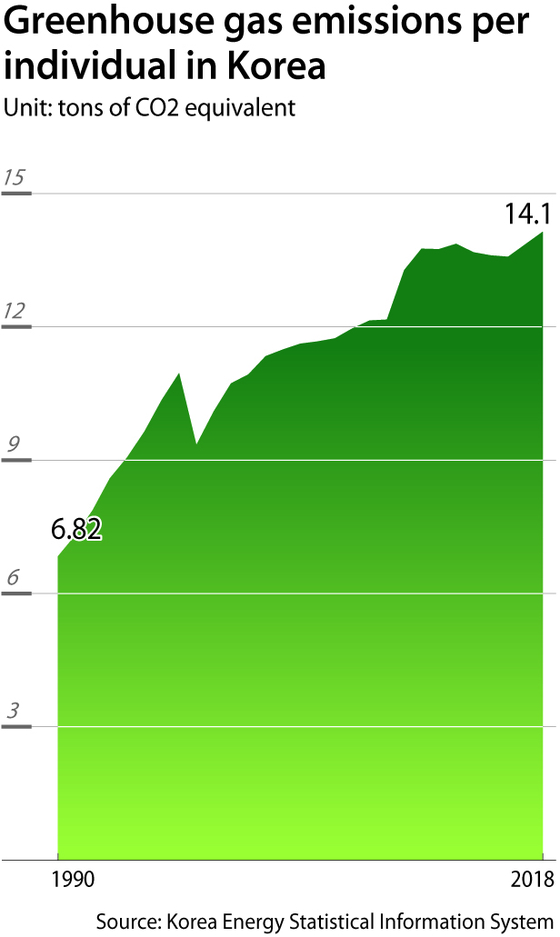 
Some environment activists find eco-friendly marketing hypocritical, pointing out that firms use these minor green activities to upgrade their brand image.

"Starbucks is making a small effort to reduce the environmental impact of its business, like adopting paper straws and encouraging people to use reusable cups," said Jung Mi-ran, director at the Korea Federation for Environmental Movement, a civic environmental organization. "But Starbucks at the same time constantly brings out new types of goods in different forms, which ultimately result in the creation of more waste."

Author Oh Eun-gyeong, who co-wrote "Zero Waste Life," criticized Amorepacific's refill store for only offering its products like shampoo and body wash in plastic bottles sold at the store, not in bottles brought by customers. Oh said on her Instagram account that "more plastic is being consumed to use the refill service."


"Companies should set a direction on how they will act eco-friendly, and then introduce products based on that principle instead of launching a certain green product and then trying to reform the entire brand image through that specific product," Jung Mi-ran said.

"Companies shouldn't be blamed for marketing their products because it is a necessary means for them to be able to sell more and raise the brand reputation to survive the market," said Jung. "But with green marketing, they should be more sincere and thoughtful on how their actions can truly help the environment if they want to be selected by consumers whose standard is already very high."