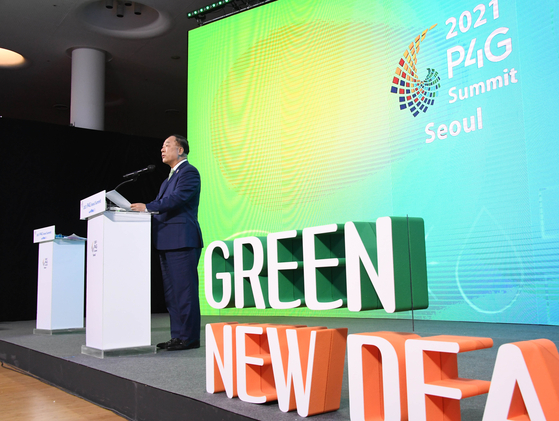 Fnance Minister Hong Nam-ki speaks on Korea's effort on carbon neutrality at the Green Future Week at the Dongdaemun Design Plaza (DDP) on Tuesday. [MINISTRY OF ECONOMY AND FINANCE]


The government will invest 3.8 percent of its GDP on Green New Deal projects by 2025 to bring about carbon neutrality for Korea.

It's also increasing its support for environmental efforts by developing countries Official Development Assistance (ODA) and contributions to the Green Climate Fund (GCF).

“For green new deal policies to be more than just a short-term stimulus or rhetoric, they need a clear goal of carbon neutrality, along with a definite timeline and a concrete means to achieve this goal,” Finance Minister Hong Nam-ki said at Green Future Week at the Dongdaemun Design Plaza (DDP) on Tuesday.

The event was held ahead of the two-day Partnering for Green Growth and the Global Goals 2030 (P4G) summit scheduled for Sunday in Seoul.

“For the concrete means, we plan to invest 3.8 percent of our GDP by 2025 in Green New Deal projects including green infrastructure, renewable energy and green mobility,” Hong said.

He stressed that the Moon Jae-in administration's Green New Deal initiative is focused on using the nation’s strength in the IT sector, including changes to Korean manufacturing to make it “smarter” and “greener.”

“The Korean government is currently working to establish a $4 billion fund to encourage large-scale private investments for the implementation of the Green New Deal,” Hong said. “Next year, a new Climate Response Fund will also be set up to help reduce greenhouse gas emission and develop forward-looking technologies for carbon neutrality.”

Hong emphasized that carbon neutrality is not only good for the environment but also will be a new engine for Korea's economic growth.

Hong noted that Covid-19 had served as a wakeup call to the risks of climate change in an op-ed distributed through Project Syndicate, an international media organization, on Tuesday.


Hong wrote that the Korean government will increase its “green share” of ODA from 6 percent to over 20 percent while donating $300 million to the GCF to support developing countries.

He pledged that the Korean government will stop overseas funding of coal-fired power plants.

“With this month’s P4G Seoul Summit coming on the heels of U.S. President Joe Biden’s climate summit last month, and as a prelude to the United Nations Climate Change Conference (COP26) in November, I am hopeful that 2021 will be remembered as the year when the international community got back on the Paris track,” Hong wrote in his op-ed. “Now that the race to carbon neutrality has begun, I am confident that South Korea’s carbon-neutrality strategy, like our economic-development experience more broadly, can serve as a model for others.”

The Moon administration last year announced a two-track economic plan – Digital and Green New Deal – as a foundation for economic growth in the post-Covid-19 era.