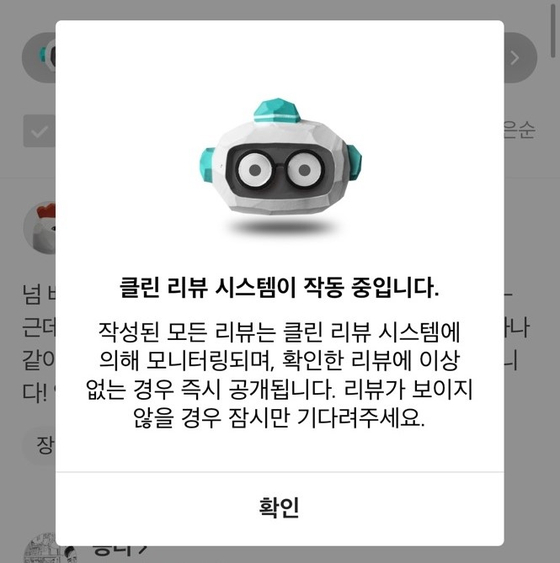 
A person who published fake reviews on the Baedal Minjok food delivery app has been sentenced to 10 months in prison for obstruction of business.

Woowa Brothers provided information on the case but would not identify the person, so the case could not be confirmed through court records. The company said it was the first time someone has received a sentence for publishing fake reviews.

In most cases, fake reviewers receive compensation from a restaurant for positive comments and often never even visit the establishment. Woowa Brothers did not detail what the person had written.

It did say the person charged wrote more than 350 fake food reviews for a number of restaurants from September 2017 through May last year.

Restaurants that worked with the fake food reviewer have either been warned or were forced to end their contracts with Woowa Brothers, depending on the frequency of their use of fake reviews.

Seoul Eastern District Court made the ruling in a November trial. The ruling was finalized in late April after the court dismissed the fake reviewer's appeal.

“It is unprecedented for a court to give a heavy punishment of a prison sentence to a fake reviewer,” Woowa Brothers said in a statement. “But as the impact of reviews on a restaurant’s business grows, the court is seen to have concluded that fake reviews could cause damage to restaurant owners and consumers.”

Woowa Brothers is preparing to file a complaint against other food reviewers it believes have submitted false recommendations.

The company vowed to “eradicate fake reviews” through continuous monitoring.

Woowa Brothers uses a “clean review system” to distinguish actual reviews from fake reviews. The system checks reviews posted on the site and limits their exposure to other users if they are believed to be fake. Reviews may be blocked.

It analyzes whether it is an actual review based on a number of factors, including a record of orders and the time a reviewer spent on the app.

“I hope competition for fake reviews is wiped out based on the result of this ruling, and cases where the majority of restaurant owners face damage or consumers fall for wrong information are not repeated,” said a spokesperson for Woowa Brothers. The company “will continue to take strong action against those who write fake reviews.”

No tip required: Robots deliver to your door