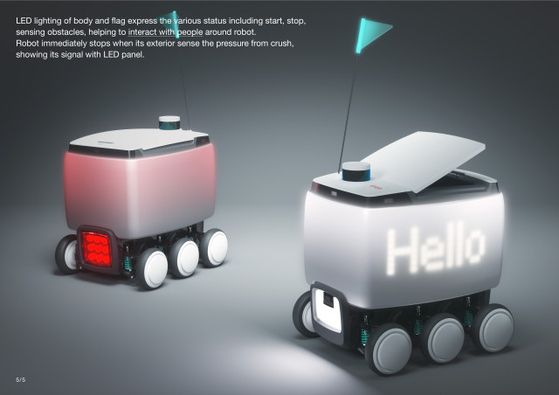 Woowa Brothers’ upgraded autonomous driving robot Dilly Z, which is scheduled to be used by the end of the year. [WOOWA BROTHERS]


Woowa Brothers, operator of the Baedal Minjok food delivery service, will start using a delivery robot by the end of the year.


Woowa Brothers showed the design of the robot, the Dilly Z, on Monday and said it will go into use at the Alleyway Gwanggyo shopping complex in Suwon, Gyeonggi, by the end of the year. That's earlier than the original schedule for next year.

The Dilly Z will have autonomous driving functions and can be used both inside and outside a shopping mall or residential complex.

The business model for how the robot will be commercialized hasn't been disclosed.

The upgraded Dilly features padding on the exterior of the device in case it bumps into people, animals or things during deliveries.

The robot also features LED lighting that can flash simple text messages such as "hello." A flag that also has lights is intended to make pedestrians and animals be aware of a moving robot coming their way. It also has a headlight, brake and obstacle identification sensors.

It has six wheels and is able to carry 30 kilograms (66 pounds) of cargo.

Under current traffic regulations, autonomous robots are only allowed to operate on private property, not public facilities like roads and parks.

“Even for a delivery from a restaurant in a residential complex to a home within the complex, a lot of state-of-the-art technologies and know-how is needed such as autonomous driving functions and communications with elevators,” said Joseph Kim, head of the robot development business at Woowa Brothers.