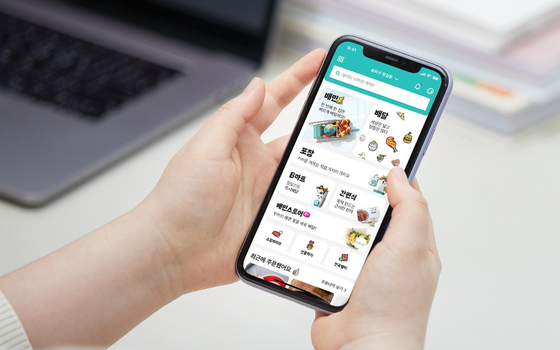 
Food delivery apps are getting creative in an effort to improve their profitability as cutthroat competition threatens their chow-to-door model.

They are making bold moves into general e-commerce -- at least one seeking to become a "super app" that does it all and does it better -- raising the possibility that that space, also crowded and challenging, becomes even more so.

Baedal Minjok, the largest food delivery app, started an e-commerce service on its Baemin app in mid-December. Now people can buy flowers, shoes and many other non-food products on the Baemin app.

Kim Beom-jun, CEO at Woowa Brothers, said during an online conference last month that Baemin will "evolve into an e-commerce platform beyond a food delivery app." Woowa Brothers is Baemin's operator.

GS Retail, which acquired Yogiyo with a consortium in August, pledged to become a leading quick-commerce provider by generating synergy between Yogiyo's online service with 16,000 GS Retail stores, which range from convenience stores to supermarkets.

The service expansion came as food-delivery apps met with intense competition from the arrival of new players, like Coupang Eats in 2019 and Shinhan Bank's Ttaenggyeoyo, rolled out this month.

More food delivery apps and consumer demand for speedier deliveries have resulted in a shortage of riders. If the number of riders can't be increased and if economies of scale cannot be achieved, they may have no choice but to provide services other than just food deliveries to improve profitability.

"Similar to Coupang's entrance into the food delivery market, existing food delivery players are expanding into commerce to protect and expand their business by increasing the number of users," said Jung Yeon-sung, a business professor at Dankook University.

As of January 2021, Baemin had 65.99 percent of the food delivery market, followed by Yogiyo, with 17.86 percent, and Coupang Eats, with 13.56 percent, according to data by Global Bigdata Research.

In recent years, Baemin has rolled out various lifestyle services, such as B Mart quick commerce and live commerce. Live commerce is similar to home shopping, but it is streamed online and allows viewers to chat with hosts in real time.

And it started its e-commerce service, allowing users to purchase a more diverse range of products, including skin products, sneakers and bunches of flowers.

The pilot service went live mid-December and is currently only available in Gangnam, southern Seoul. Cosmetics brand Aritaum, flower brand Kukka and Orga foods are some of the brands that sell on the Baemin app.

The companies deliver products to consumers directly. Baemin charges a commission to the sellers.

Baemin redesigned the app's main page in December to make it easier for users to find services other than food delivery. Before, images of different food categories were displayed on the main page. The goal of the new main page is "to make it seem like a portal," said Woowa Brothers chief product officer Kim Yong-jun.

Baemin aims to "raise customer accessibility by offering a diverse range of services on a single app," said Park Sang-hun, a spokesperson for Woowa Brothers. "People who clicked the app to order food can also order daily necessities, or vice versa."

Yogiyo is expanding through partnerships and a focus on quick commerce.

"Yogiyo is expanding partnerships to offer membership-based subscription services, something not done by other food-delivery apps," said Choi Hyun-jin, a spokesperson for Yogiyo. "We aim to become a 'super app'."

The super app would provide a variety of seemingly unrelated services on a single mobile interface.

Yogiyo is also expected to strengthen quick delivery. With the acquisition, GS Retail said it plans to "provide an overwhelming assortment of products for quick commerce" by integrating Yogiyo's online platform and GS Retail's 16,000 stores, which include GS25 convenience stores, GS The Fresh supermarkets and lalavla health and beauty stores. It said it expects to become the No. 1 quick commerce service provider "instantly."

Service expansion has been inevitable for food delivery apps as they seek to diversify profit at a time when competition grows fiercer.

Though food delivery is growing double digits annually, profit is not growing in line with the market expansion due to heavy marketing expenses and the growing pressure to get food delivered quickly.

Yogiyo and Coupang Eats did not disclose their earnings.

The competition intensified since Coupang Eats entered the market with a single household delivery system.

Under the system, riders deliver just one order at a time, rather than multiple orders, in return for a higher payment. The goal is to ensure the freshness of the food, but it resulted in a shortage of delivery riders and higher delivery costs.

Baemin "faced a sense of crisis as we could fall behind the market if we didn't adopt the single delivery system," said Park from Woowa Brothers. "So we adopted the system in June, and yes, the decision was affected by Coupang Eats. We had no choice because the market changed so dramatically. It is costing us a lot, and I believe it will be the same for Coupang Eats."

Park added that Baemin loses between 1,000 won to 1,500 won per delivery. Coupang Eats declined to comment on the matter.

Yogiyo did not adopt the single delivery system. It said it currently doesn't have plans to do so, saying the system seems "unreasonable" due to the cost.

"Though we started off as a food delivery app, our goal is to become a lifestyle platform because that is more helpful in attracting and locking in users to our app," Choi added.