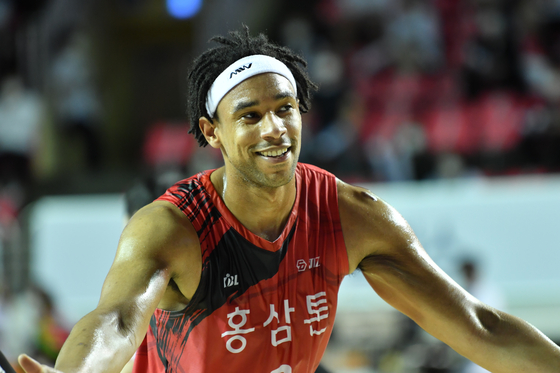 Jared Sullinger of Anyang KGC, who was named the MVP of the KBL playoffs, says red ginseng helped him manage his physical condition. [KOREA GINSENG CORPORATION]

Despite landing in third place in the regular season with 30 wins and 24 losses, Anyang KGC remained upbeat during the postseason and won the final match against Jeonju KCC Egis, the winner of the 2020-2021 regular season.

While every player showed flawless teamwork and individual performances, no one could deny that the MVP was Jared Sullinger.

Sullinger was drafted by the Boston Celtics in 2012 and recorded 25 points and 20 rebounds in 2014, the first 20-20 by a Celtics player since 2007. After joining Anyang KGC last March, Sullinger showed superb all-around performance and raised the morale of the team, even scoring 42 points on his own during the fourth match against Jeonju KCC Egis.

Sullinger’s secret to his unwavering concentration and stamina is red ginseng, said the star player during several press interviews.

“Red ginseng helped me regain strength and keep focus on the game,” Sullinger said, adding that he always takes red ginseng before a game.

KGC supplies red ginseng products to the Korean national archery team, too, as archery requires a lot of concentration as well.

Officially certified by the Ministry of Food and Drug Safety for boosting immunity and enhancing blood circulation, red ginseng lessens fatigue by decomposing lactic acid, and is also effective in improving concentration. Ginsenoside and ginseng polysaccharide included in red ginseng are good for restoring people’s physical condition as well.