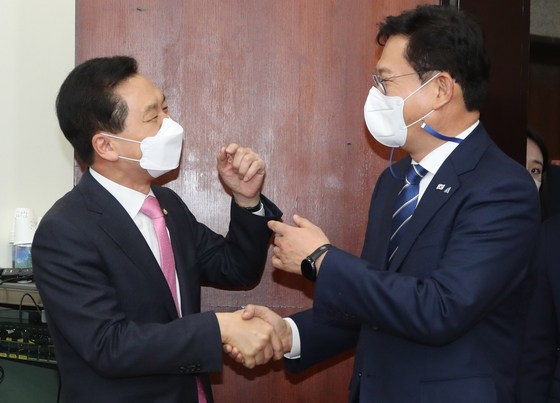 In this file photo, chairman Song Young-gil of the Democratic Party, right, meets with the People Power Party's floor leader and acting chairman, Kim Gi-hyeong, on May 3. Song and Kim, along with other heads of political parties, will attend a luncheon hosted by President Moon Jae-in on Wednesday at the Blue House. [YONHAP]


President Moon Jae-in will meet with leaders of ruling and opposition parties at the Blue House on Wednesday and explain the outcome of his recent summit with U.S. President Joe Biden.

“We have many things to share with them regarding the Korea-U.S. summit, such as the outcomes of the discussions on semiconductors, vaccines, Korea-U.S. alliance and the Korean Peninsula process,” the aide said. “And we need to seek the parties’ cooperation. Leaders of the five parties and their spokesmen will attend the event.”

Moon will be accompanied by the presidential chief of staff, national security office chief and other aides, the aide said.

It will be the first time in 15 months for Moon to meet with leaders of the ruling and opposition parties. Song of the DP was elected as its chairman on May 2, and Kim was elected as the floor leader of the main opposition PPP on April 30.

Kim said Tuesday that he also wants to have an exclusive meeting with Moon. “I'm making this proposal because I have selected some items on the agenda that I want to discuss with Moon,” Kim said in an interview with CBS radio. It remains to be seen whether Kim will get that opportunity to meet with Moon separately.

Moon had a summit with Biden last week at the White House and reached a series of agreements including one over the U.S. supply of Covid-19 vaccines. Other economic and security cooperation measures were also agreed upon, and Moon is expected to seek the ruling and opposition parties’ backing.

In an interview with the JoongAng Ilbo on Monday, Kim said he accepted the invitation because he wants to offer opinions on behalf of the party after listening to Moon’s briefing.

“If it were just a formality, I would have had no intention of attending the luncheon,” Kim said. “But there are many pending issues concerning people’s lives, such as the Covid-19 vaccines, so I accepted the invitation.”

Kim and other PPP politicians have been critical of the Moon administration’s responses to the pandemic, particularly the slow procurement of vaccines.

“We don’t know what will happen next, just that the U.S. decided to supply vaccines for our troops,” Kim said. “Vaccine procurement is a very critical issue. Moon said the situation of Korea is different because he was able to have a summit [with Biden] without wearing face masks. But our people are still wearing face masks. Wearing no face masks during the summit was not something he should have bragged about.”

At the summit on Friday, the United States agreed to offer vaccines for some 550,000 Korean troops. Defense authorities of Seoul and Washington said they have started talks to follow through with the supply agreement.

As of now, 110,000 Korean troops who are 30 years old or older have already received AstraZeneca vaccines. Doses to be offered by the United States will be used on the 450,000 soldiers who are younger than 30.

Whose fault is it anyway?