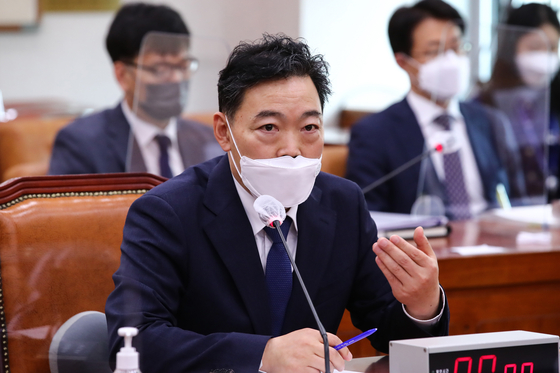 On the eve of Kim’s confirmation hearing at the National Assembly, local media reported that Kim had taken criminal cases concerning two troubled private equity funds — Lime Asset Management and Optimus Asset Management — after he joined HwaHyun law firm in August 2020. Kim, a former prosecutor, served as the vice minister of justice from June 2018 till April 2020.

According to the Seoul Bar Association’s data submitted to Rep. Kim Do-eup of the main opposition People Power Party (PPP), Kim took 22 cases after joining the law firm. Among them, 19 were criminal cases and at least five of them were linked to the Lime and Optimus scandals.

According to the Attorney-At-Law Act, a lawyer who served a government post is barred for one year from taking a case handled by his former office. Kim, however, took two cases to defend Woori Bank in September last year, just five months after he left the Justice Ministry.

The bank was investigated by the Seoul Southern Prosecutors’ Office for having sold Lime’s funds to many customers despite knowing that the investors would lose money. Investors eventually suffered losses worth about 1.6 trillion won ($1.4 billion).

According to the Seoul Bar Association’s data, Kim also took cases concerning the Optimus Asset Management scandal. He was listed as a defense lawyer for NH Investment & Securities executives including CEO Chung Young-chae in December last year. The executives were investigated and prosecuted for having sold poorly planned and operated Optimus fund products to their customers. Investors suffered about 432.7 billion won in losses.

Kim was also hired as a defense attorney in December last year byan aide to then-Democratic Party chairman Lee Nak-yon in an investigation into suspected violation of a political funding law. Lee was suspected of receiving illegal financial assistance from an affiliate of Optimus, and the aide was questioned by the Seoul Central District Prosecutors’ Office. In the middle of the probe, the aide was found dead.

Lime and Optimus have together been unable to return over 2 trillion won in customer funds. The country’s financial regulators have said they suspect the money is unavailable due to bad investments, Ponzi scheme-like structuring and possible fraud.

Prosecutors also investigated suspicions that operators of the funds lobbied key members of the Moon administration and the ruling party.

In response to criticism by opposition lawmakers for his apparent lack of ethics and possible legal violations from taking cases too soon, Kim said he had not defended the fraudulent fund operators. However, he refused to clearly identify his clients at the confirmation hearing, citing his duty as a lawyer to maintain confidentiality.

“I can assure you that I performed my job as a lawyer within the legal boundaries,” he said Wednesday at the confirmation hearing.

He also denied that he had received briefings from the prosecution about its investigation into the Lime fund scandal. The Optimus fund investigation started in June last year, shortly after Kim left the Justice Ministry in April.

“I accept that working as a lawyer after retiring from a top government post does not coincide with people's standards,” Kim said.

At the confirmation hearing, Kim refuted opposition lawmakers’ criticism that he failed to maintain political neutrality while working as the vice minister of justice.

At the hearing's opening remarks, Kim criticized Yoon Seok-youl, who stepped down in March to challenge the Moon Jae-in administration’s campaign to weaken the state prosecution service. Yoon had four months left in his two-year tenure, scheduled to expire in July.

“If my predecessor had completed his term, there would have been no need for me, a former public servant, to stand here for a confirmation hearing,” Yoon said.

Moon nominated Kim to be the new head of the prosecution service on May 3. Kim served as vice justice minister under Justice Minister Choo Mi-ae, who resigned after a prolonged dispute with Yoon over the powers of the state prosecution service, particularly its ability to both conduct far-reaching investigations and indict suspects.

Wednesday’s confirmation hearing is a mandatory step before Kim’s appointment. No vote, however, is required for Moon to formally appoint Kim as the new prosecutor general.