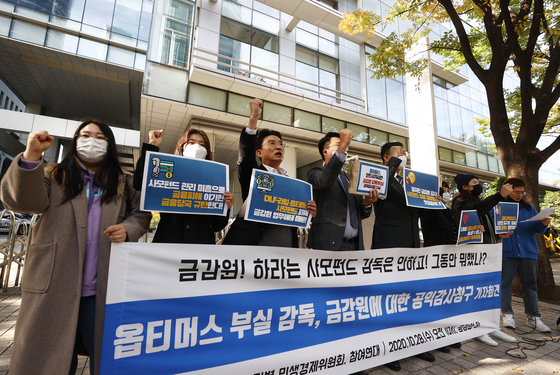 
Some 83 percent of Optimus Asset Management funds are unrecoverable, the Financial Supervisory Service (FSS) announced Wednesday, after it finished an investigation into investments made by the bust private equity fund.

Of the 514.6 billion won ($463 million) in total investment, about 31 percent could not be located at all, meaning around 160 billion won has completely vanished. The FSS suspects these funds were either embezzled or used to pay back existing investors.

Only 351.5 billion won of principal could be identified, according to Samil PricewaterhouseCoopers, the accounting firm leading the investigation. Of that, 7.8 percent to 15.2 percent of the funds, or 40.1 billion won to 78.3 billion won, could be recovered.

This is even worse than the Lime Asset Management scandal, where the FSS said between 33 percent and 45 percent of investment was retrievable from two funds managed by Lime.

The FSS said the total amount of recoverable assets could change later, as it did not include 64.1 billion won of investments into two properties currently the subject of an active court case.

Among the identifiable investments, 36.3 percent was invested into real estate project financing, 39 percent into stocks, 20.6 percent into bonds and 4.13 percent into other assets.

Optimus originally stated in its investment proposal that funds will be invested into accounts receivable of public institutions.
The FSS plans to form a consultative body to finalize the calculation, but it would take a “considerable amount of time” to assess the exact amount of losses, the regulator explained.

In regards to funds that were lost, FSS said it will “actively cooperate” with the prosecution’s investigation into fraud and maximize the recovery.

NH Investment & Securities, the biggest seller of Optimus funds, issued a statement immediately after the announcement from the FSS claiming the calculations were too “conservative” and that more money could be recovered.

“Some of the investment included in Samil’s calculation was from companies that conspired with Optimus Asset Management into deceiving investors,” a spokesperson from NH Investment & Securities said in a call with the Korea JoongAng Daily.

“The retrieval rate is the baseline data used to get a sense of what the compensation will be. We believe a maximum of 26 percent, or up to around 110 billion won, could be recovered if that fraudulent money is deducted and the 64-billion-won investment facing a court battle is included.”

NH Investment & Securities previously announced it would pay back up 70 percent of principle to investors, not as a form of compensation, but as a means to provide “financial liquidity” to investors.

The FSS said it will swiftly review the matter and come up with a settlement plan for investors.

A total of 265 settlement dispute claims have been filed with the financial regulator as of October.