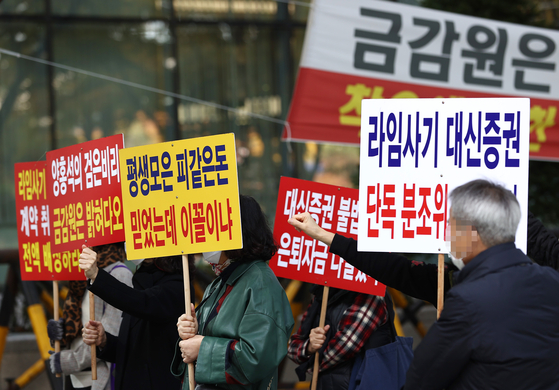 Lime investors hold a rally in Yeouido, western Seoul, on Oct. 29, demanding a full return of their investment money to the Financial Supervisory Service. [YONHAP]


KB Securities has been ordered to make restitution for up to 80 percent of some investments made in Lime Asset Management funds.

Lime, which is the largest hedge fund in the country, abruptly halted redemptions in some funds in late 2019. Managers of the funds are alleged to have been engaged in a Ponzi scheme. More than 1.6 trillion won ($1.47 billion) of investor money has been frozen.

The committee said Thursday the reimbursement rate for investors that signed up for Lime funds through KB Securities will range between 40 and 80 percent, depending on factors like level of investment experience.

The committee reached the conclusion the previous day during a meeting that was not publicized.

KB Securities sold 58-billion-won worth of the Lime AI Star 1.5Y fund from January through March in 2019. It also provided total return swap (TRS) deals — where a firm mortgages client money to raise additional capital — for the operation of Lime funds.

“I only know that the black color is letters and the white color is paper, so please do whatever is best,” the woman in her 60s told the seller, according to the committee.

The investor’s monthly income was 1.7 million won, but the seller falsely changed the figure to 4 million won or above when registering the fund under her name.

Another investor was inaccurately described as an aggressive investor, while the third investor was told “strongly” that the products are safe.

Financial dispute mediation typically takes place after actual losses have been calculated. But the mediation was made earlier for Lime funds because it is expected to take around four to five years for the asset analysis to be concluded.

More than 4,000 individual investors and 580 corporate investors claim damages from the Lime suspension. Lime operated 173 funds. A total of 673 mediation cases were registered as of Dec. 21.