Crab cakes are not enough

Crab cakes are not enough 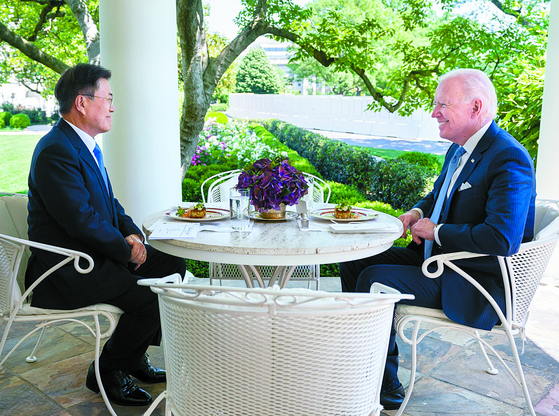 PARK HAE-LEE
The author is a political and international planning team reporter of the JoongAng Ilbo.


A crab cake is a dish made by mixing together crab meat with mayonnaise, eggs and milk and frying or baking it. It is called a “cake,” in the same sense as rice cake or fish cake.

The Chesapeake Bay on the Atlantic Ocean in the United States is a well-known habitat for blue crab. The bay stretches from Maryland to Virginia. Until the early 1990s, before refrigeration facility became commercialized, crabs were consumed mostly in this region. It was after the 1920s that crab dishes spread across America, thanks to developments in refrigeration technology.

There are many theories about the origin of crab cakes, but one likely theory is that they originated from Native Americans. The Native Americans in the Chesapeake Bay area separated the shell and crab meat, mixed it with other ingredients and baked it. Later, settlers adopted this cooking method.

The name, crab cake, became official when Crosby Gaige included the recipe of crab meat, spices and bread crumbs in his cookbook and described it “Baltimore crab cakes,” naming it after a nearby city. The book was chosen as the New York World’s Fair Cook Book and became famous. In the Maryland region, the recipe was recreated, and the dish was actively promoted. “Maryland crab cakes” became a proper noun and spread around the Unites States. Due to its short history, it is hard to find a time-honored traditional dish like the crab cake in America.

President Moon Jae-in had a one-on-one summit and luncheon for 37 minutes with U.S. President Joe Biden at the White House on May 21. The menu included Maryland crab cakes, a choice reflecting Moon’s love for seafood. It stands in comparison to Japanese Prime Minister Yoshihide Suga having a hamburger with Biden for a lunch that lasted 20 minutes.

During the summit, President Moon said that it was the best visit and the best meeting. Korea’s ruling Democratic Party praised it as “unprecedented” and the “greatest accomplishment in history.” The summit produced many great outcomes, including building a vaccine partnership. But specific plans are uncertain, such as on vaccines for the general public or North Korea policy. Rather than praising the outcomes of the trip, the meeting may have reconfirmed what’s left to be solved during his term. That’s why I am not simply satisfied with the crab cake luncheon.