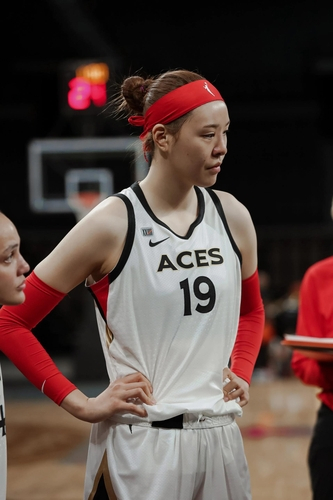 
Las Vegas Aces center Park Ji-su tallied one rebound and one block in an 85-79 win against the Phoenix Mercury, her fifth WNBA appearance at the Phoenix Suns Arena in Phoenix, Arizona on Thursday.

Park's fourth appearance came Monday at a game against the Connecticut Sun, where she recorded one rebound and one assist during the nine minutes and 57 seconds that she played.

Both her shots missed the hoop, but she managed two blocks, deflecting an attempt from the Suns.

Park's fifth game was on Thursday as the Las Vegas Aces faced the Mercury, who were tied with the Aces at fifth on the WNBA table.

Park played a brief 2 minutes and 20 seconds toward the end of the first quarter. Despite failing to score any points, she tallied one rebound and one block as soon as she got on the court.

Las Vegas won 85-79 against Phoenix, putting themselves at fourth on the table.

Park and her team will face the Indiana Fever at home on Saturday.