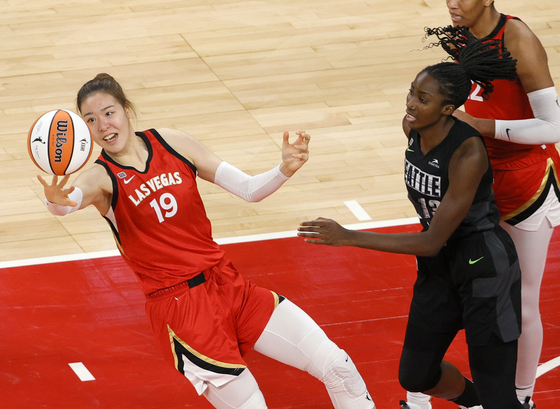 Park Ji-su, left, of the Las Vegas Aces tries to grab a rebound against Ezi Magbegor of the Seattle Storm during their game at Michelob ULTRA Arena on June 27, 2021 in Las Vegas, Nevada. The Aces defeated the Storm 95-92 in overtime. [AFP/YONHAP]


Park Ji-su rounded off her last Las Vegas Aces game of the first half of the WNBA season with three points, four assists and two rebounds before she returns to Korea to prepare for the 2020 Tokyo Olympics.

Park was on the court for 10 minutes and 10 seconds on Sunday at College Park Center in Arlington, Texas at a game against the Dallas Wings, the Aces eventually taking away the game 95-79.

The Aces conclude the first portion of the season with 15 wins and six losses in second place. The team reconvenes for the rest of the season during the first week of August.

Some Aces players will go on to play in the All-Star Game, while A’ja Wilson, Kelsey Plum, Liz Cambage, Chelsea Gray and Park will train with their respective national teams ahead of the Games.

Though Park plays less than 10 minutes per game in the WNBA, she is the face of basketball in Korea.

Park debuted with the Korean team at only 16, the youngest player ever to do so.

Now 22-years-old, Park is already one of the biggest names in the WKBL and one of the few players to have concurrent careers in both Korea and the United States.

Park is a crucial part of the national team and is expected to make a huge difference on the court in Tokyo. Last February, Park tallied 15 points and nine rebounds at Team Korea’s 37-19 win against Great Britain during the Olympic qualifiers.

“I’ve always wanted to go to the Olympics," Park told the Las Vegas Review-Journal through a translator application on her mobile phone. "I’m so happy to achieve it.”

Korea ranked at No. 19 in the world, will play in group A alongside No. 3 Spain, No. 4 Canada and No. 8 Serbia, with the top two countries advancing to the quarterfinals.

Korea's first game will be against Spain on July 26.