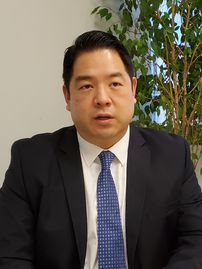 Christopher Ahn, who faces possible extradition to Spain for his role in a raid on the North Korean embassy in Madrid, speaks to the JoongAng Ilbo for an interview on Thursday in Los Angeles. [PARK HYUN-YOUNG]


The man caught on surveillance cameras entering the North Korean embassy in Madrid on Feb. 22, 2019 strikes an imposing figure. Broad-chested and sporting sunglasses and a beard, the intruder lingers only briefly in the entrance to the building before making his way inside.

Now clean-shaven and dressed in a navy-blue suit for an interview with the JoongAng Ilbo on Thursday in Los Angeles, Christopher Ahn, who U.S. federal prosecutors are trying to extradite to Spain for his role in the raid on the embassy by the Free Joseon group –– an anti-Pyongyang activist group –– emphasized that his primary motive was to help people who he said requested assistance, and that his life will be at risk if he is sent to Spain.

"[North Koreans] are raised to believe that the West is evil. But when these diplomats come to the West, and go to these embassies and see with their own eyes what the reality is, they have to make a decision: whether or not they want to continue to perpetuate this lie to their children," Ahn said of the diplomats in Madrid, whom he says asked for help making a mass defection look like a group abduction to avoid repercussions for their relatives back in North Korea.

Ahn is the only member of the group who conducted the raid to have been arrested to date. Its leader Adrian Hong remains a fugitive. Ahn said he occasionally carried out assignments for the group when asked by Hong.

"I never really considered myself as an active member of the organization," Ahn said when asked if he was a Free Joseon member. "I just saw myself as someone who believed in what they're doing, and wanted to help in whatever way that I could."

Having lost his father to cancer at the age of 17, Ahn said he participated in Free Joseon's bold undertakings because he sympathized with the individuals who asked for the group's help, such as Kim Han-sol, the estranged nephew of North Korean leader Kim Jong-un, whose father was assassinated with a nerve agent in Malaysia in 2017.

"He was put in a position where he now had to make decisions that would keep his family safe," Ahn said of the then-17-year-old Kim in the immediate aftermath of the assassination, which Western and South Korean intelligence believed was ordered by North Korean leader Kim Jong-un. "His mom and his younger sister were looking to him to bring them to safety. They had no one else to count on. When I looked at him, I remembered how I felt when my dad passed away."

When asked how he viewed U.S. federal prosecutors’ attempts to extradite him to Spain to face charges of unlawful entry, illegal detention, willful bodily harm and theft, Ahn said he bears no grudge against them, or even the North Korean diplomats who later testified in Spain that they were bound, beaten, and threatened by Free Joseon activists.

“[The prosecutors] are doing their job, and so I don't have any ill will against the government or against the Department of Justice,” Ahn said.

However, he emphasized that he believed the reality of extradition was significantly more dangerous than authorities may realize. “This entire situation is very confusing for the average person, who’s not familiar with North Korea and the intricate details of how brutal that government is,” Ahn said.

Regarding U.S. Magistrate Judge Jean Rosenbluth, who is presiding over his extradition case, he said, “I empathize with the situation she’s in as someone who may not be familiar with that, then to learn about all of this, and then be presented with a situation that may have never been presented to another judge in American history.”

During his extradition hearing on Wednesday, Ahn’s counsel Naeum Rim argued that once in Spain, Ahn could be at risk of assassination or abduction by Pyongyang, which maintains diplomatic relations with Madrid. She pointed out the Spanish authorities have not clarified what level of protection Ahn would receive on Spanish soil.