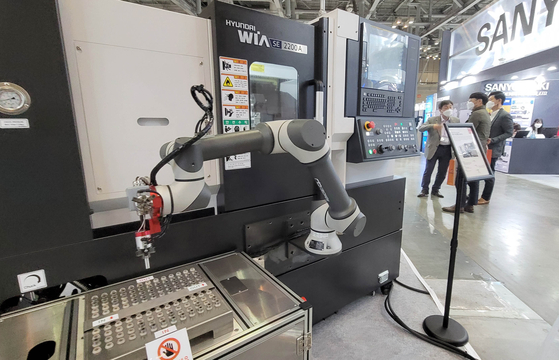 Semiconductor manufacturing robots displayed during an exhibition held in Busan on May 26. Semiconductor production grew 30 percent year-on-year in April. [YONHAP]


Industrial production rose 12.4 percent on year in April, according to Statistics Korea Monday, the sixth consecutive increase in the figure and the fastest growth in the statistic in over two years.

The strong reading adds to the government's case for 4 percent economic growth this year.

On the same day, the Organization for Economic Cooperation and Development (OECD) raised its outlook for Korea’s 2021 growth from the previous 3.3 percent to 3.8 percent.


While the OECD's outlook is lower than the Bank of Korea's 4-percent forecast or the Korean government's target, it is faster than the International Monetary Fund’s (IMF) projection. The IMF raised Korea's growth outlook from 3.1 percent in January to 3.6 percent in April.

In manufacturing, the average operating rate in April was 73.8 percent, up 4.9 percentage points from the same month the previous year, when it fell below 70 percent as plants were temporarily shut due to the spread of Covid-19.

Industrial production is manufacturing and mining output. Industrial output, a broader measure that includes fisheries and forestry, construction, services and public administration, was up 8.8 percent on year, the fourth consecutive positive month and the fastest on-year growth in nearly a decade.

Services grew 8.4 percent. In the hotel and restaurant category, output grew 8.3 percent on year, the second consecutive month of growth.

"As the economy is recovering and inoculations are in progress, consumer sentiment has improved," said Eo Woon-sun, a senior official at Statistics Korea's short-term economic statistics department. "The capacity to spend is improving as well."

On-month figures were less encouraging. Industrial output fell 1.1 percent in April compared with May, the sharpest decline in 11 months. Industrial production was down 1.6 percent on-month, with semiconductor output down 10.9 percent.

"As production when compared to the previous year grew 30 percent, the overall momentum in the semiconductor industry isn't bad," said Eo.

The industrial output report comes days after the Bank of Korea raised the country's growth outlook from 3 percent to 4 percent for this year citing strong exports, facility investment and private consumption.

In its latest economic outlook, the OECD projected that this year's growth momentum will continue through 2022 on the Korean government’s expansionary macroeconomic policies, the easing of social-distancing regulations and an improvement in consumer spending.

It noted the contribution of the Korean New Deal and non-contact businesses.

The OECD projects the global economy will grow 5.8 percent in 2021, up 0.2 percentage points from its March outlook.

"The world economy has now returned to pre-pandemic activity level," the OECD noted in its report.

It also noted that many countries will continue to struggle to recover to pre-pandemic levels.