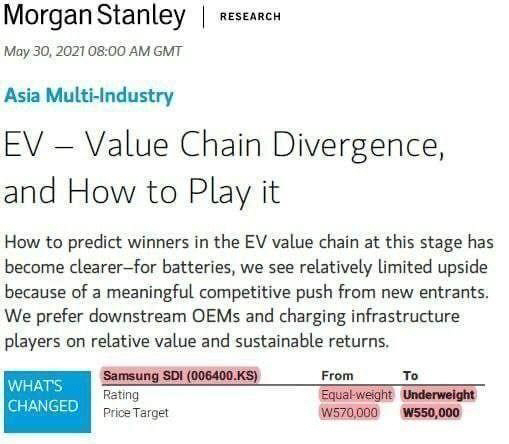 Batteries were expected to be the next stout pillar for Korea's economy, following semiconductors, but local battery makers are being tested by intense competition and a trend among automakers to do their own battery making.

U.S. investment bank Morgan Stanley said in a May 30 report that "for batteries, we see relatively limited upside because of a meaningful competitive push from new entrants." It lowered its investment recommendation for Samsung SDI from neutral to underweight, which means the bank thinks the security will underperform in the future.

The report triggered falls in Samsung SDI shares on the local stock market. On Monday, Samsung SDI's price slid by nearly 4 percent to close at 615,000 won. On Tuesday, the price slightly recovered, but only by 0.2 percent or 1,000 won, to close at 616,000 won.

On Wednesday, Samsung SDI shares closed at 611,000 won, down 0.81 percent from the previous trading day.

On May 25, Credit Suisse released a report on LG Chem changing its outlook for the stock to "underperform" from "outperform," meaning the stock will not keep up with the market average. The Zurich-based investment bank slashed its target price for the chemical company from 1.3 million won to 680,000 won.

On Wednesday the company's shares closed at 807,000 won, down 2.18 percent from the previous trading day.

In the first four months of 2020, CATL had a 21 percent share, while the Korean battery makers had 35.1 percent combined.

The other threat to battery makers is automakers making batteries on their own.

Volkswagen pledged to build six battery cell factories in Europe by 2030 to produce 240 gigawatt hours (GWh) capacity per year through joint ventures earlier this year. This will reduce the carmaker's dependence on supplies from Korean battery makers like LG Energy Solution and SK Innovation.


Automakers have been trying to reduce their dependence on Korean battery makers largely due to price. Batteries account for roughly 30 to 40 percent of an electric vehicle's production cost so it makes sense for automakers to look for more price competitive batteries.

Tesla started using CATL batteries last year. Even Hyundai Motor is planning on expanding its use of Chinese batteries in electric autos.

Some local analysts, however, disagree with the global investment banks.

"It is not likely the new entrants and automaker's efforts to internalize battery production will actually become threats to operations of Korean battery makers within the next five years," said Kim Hyun-soo, an analyst at Hana Financial Investment.

"I agree that Korean battery makers are suffering from low profitability but I don't think there are grounds to downgrade investment opinions on them," said Yeom Seung-hwan, a manager at eBest Investment & Securities.