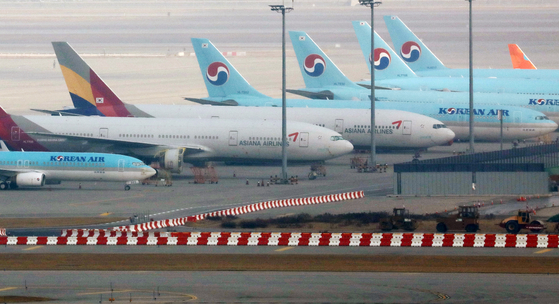 
A subsidy supporting the pay of airline workers ends soon, and carriers are scrambling to extend the special benefit as the companies have yet to recover from the pandemic.

The employment maintenance subsidy is a support measure given by the government to certain business categories, including aviation and tourism. If carriers keep employees on a paid leave at 70 percent salary, the government pays for 90 percent of the reduced salary for 180 days and the company the rest.

Some 33,000 airline employees are currently on a paid leave with the help of this program, and the total doesn’t include airport ground crew.

The current special support package started in January this year, and it is slated to come to an end on June 30.

With the tourism and aviation industries not fully recovered from the pandemic, employees at airlines are calling for the program's extension.

OZ Union, which represents Asiana Airlines workers, is currently gathering signatures online and calling for the extension of the support. The signatures will be submitted to the Ministry of Employment and Labor (MOEL) and Ministry of Economy and Finance (MOEF).

Being one of businesses hardest hit by the pandemic, airlines say it’s impossible to maintain their current workforce without the subsidy.

“There are no carriers that can fully pay salaries of their current workforce,” said one source from a local airline on the condition of anonymity.

Aviation unions are speaking up. The Korean Pilot Union Alliance released a statement on Tuesday requesting the government to provide employment maintenance subsidies for a longer period. On Monday, the Korea Civil Aviation Association submitted a statement to the MOEL requesting similar measures. According to the statement, many airline workers are expected to face lower job stability at the end of June when the subsidy ends.

Despite the requests, the government has yet to give a clear answer.

“There is nothing decided about extending the employment maintenance subsidy,” said a spokesperson for the MOEL on May 25.

Although the carriers are experiencing hardships, the government says it needs to remain impartial when offering subsidies. Even if the employment maintenance subsidy is extended, financing it is another question. The government spent more than 200 billion won subsidizing airline and airport ground staff employment last year.