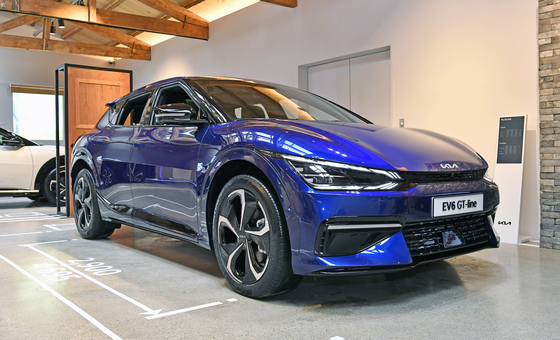 Kia’s EV6 has a competitive edge over its cousin and rival, Hyundai Motor's Ioniq 5.

It has more powerful batteries and can drive farther. Possibly even more important, at least for the look conscious: it wears its sporty and bold design better than the Ioniq 5.

The Korea JoongAng Daily recently visited a showroom where three variants of the EV6 -- the Standard, the GT Line, and the high-performance GT -- were on display.

While the Ioniq 5 seems to have come from the future, with pixel-inspired headlamps and sharp creases throughout the exterior, the Kia EV6 seems like a sporty SUV that happens to run on electricity.

With a redesigned version of Kia’s signature Tiger Nose grille, its face had a definite link with the Kia look of the past.

The GT Line and the GT versions had accentuated slopes on the hood, giving a more sporty and voluminous demeanor.

The vehicle's side silhouette is its highlight. An elongated wing-type spoiler and rear-lamp spoiler complete the marriage of coupe and SUV, all atop the relatively big 20-inch tires.

The wing-type spoiler, according to the carmaker, reduces sound and air resistance. It also acts as a roof for the rear windshield, eliminating the need for rear windshield wipers.

Some futuristic elements of the Ioniq 5 are absent here. 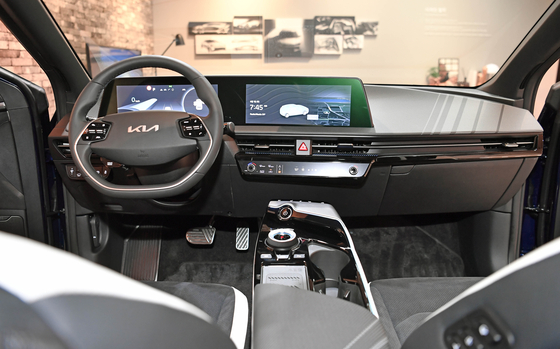 The EV6 doesn’t have digital side mirrors like the Ioniq 5, which replace traditional side mirrors with cameras to provide live feeds on screen on each side of the dashboard. It also doesn’t come with what’s called a “Moving Island” between the front seats, a moving center console.

The Vehicle-to-Load (V2L) function in the Ioniq 5 is offered in the EV6. Electricity from the car’s battery can be used to power external electronic devices such as a gas burner or a coffee machine. 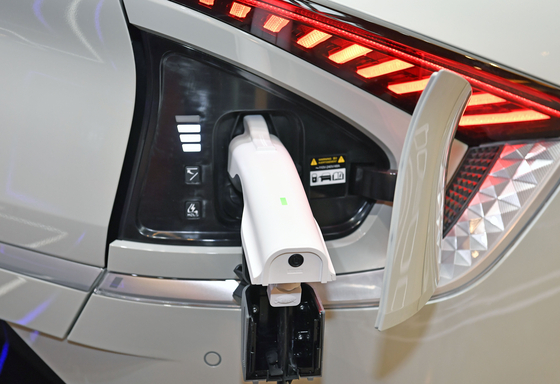 The vehicle is equipped with 12-inch curved display behind the steering wheel that integrates the digital cluster and infotainment screen.

The EV6's center console is like a compact cabinet with an engine button, dial-type gear shift, wireless phone charging pad and two cup holders arranged nicely. But its size made the driver’s seat feel cramped.

The back seat was spacious enough for three male adults to sit comfortably.

The high-performance GT, which is slated to hit the market next year, differentiated itself from other trims with a D-shaped steering wheel and neon-colored stitching on the front bucket seats. Bucket seats give a sports-car feeling.

By the specs, the EV6 has some superior elements over the Ioniq 5.

It remains to be seen whether Kia can handle such big orders since Hyundai Motor is having trouble delivering Ioniq 5s due to parts shortages.

Kia said it plans to start deliveries of the EV6 in July. 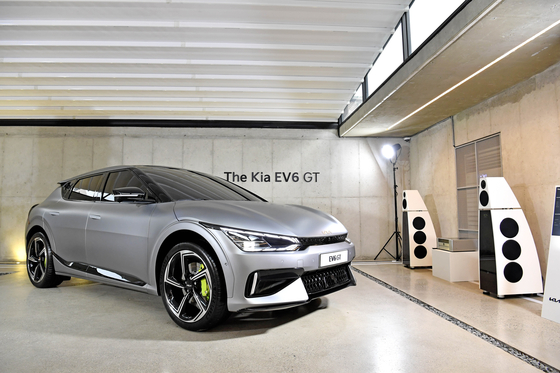