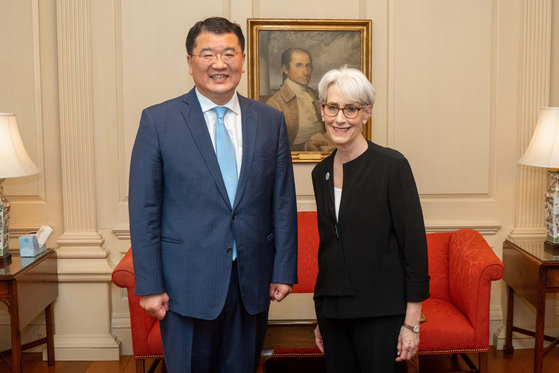 
Korea and the United States will work together to expand cooperation in strengthening supply chains for semiconductors and other critical products, Seoul’s First Vice Foreign Minister Choi Jong-kun said Wednesday in Washington, after talks with his U.S. counterpart.

Choi held 70-minute talks with U.S. Deputy Secretary of State Wendy Sherman and discussed follow-up measures to the summit between Korean President Moon Jae-in and U.S. President Joe Biden last month, the situation on the Korean Peninsula, as well as other bilateral, regional and global affairs.

Meeting with reporters in Washington after the talks with Sherman, Choi said that he and Sherman shared the view that “the summit was a success in both content and form, and that the two leaders have made more comprehensive and meaningful progress than ever.”

He added that they also agreed “to patiently continue close cooperation to resume substantive dialogue with North Korea.”

Moon and Biden in a joint statement issued at their May 21 summit called for joint efforts to increase resiliency in the two countries’ supply chains, "including in priority sectors, such as semiconductors, eco-friendly EV batteries, strategic and critical materials, and pharmaceuticals,” and “work to increase the global supply of legacy chips for automobiles, and to support leading-edge semiconductor manufacturing.”

Choi told reporters that Sherman briefed him on the White House report released the previous day on its 100-day review on building resilient supply chains and revitalizing American manufacturing.

He added that the two sides “would accelerate our efforts to take practical follow-up measures” to the summit and agreed to "actively promote cooperation" on supply chains.

The White House said in a statement that Washington “should expand multilateral diplomatic engagement on supply chain vulnerabilities, particularly through groupings of like-minded allies such as the Quad and the G7.” Korea will also be taking part in an expanded G7 summit this weekend in Britain which will be attended by the U.S. and Japanese leaders.

The Korean Ministry of Foreign Affairs in a statement Thursday said that the two envoys committed to work together toward a prompt and smooth implementation of follow-up measures to the summit, including cooperation on Covid-19 vaccines, emerging technology, supply chains and engagement with Central America’s Northern Triangle countries.

The two sides also agreed that “sustained diplomacy and dialogue are essential to achieve complete denuclearization and establishment of permanent peace on the Korean Peninsula,” a common goal confirmed by Moon and Biden in their summit.

Choi and Sherman committed to “continue close coordination to resume meaningful dialogue with North Korea,” as the Biden administration signaled it is open to engagement following its comprehensive review of policy on Pyongyang.

Sherman recently visited Southeast Asia, and the two diplomats condemned the violence by the Myanmar military and police against civilians, and called on the international community to increase efforts to immediately put an end to such violent acts and for a swift return to democracy, said the Foreign Ministry.

They also “exchanged views on affairs and cooperation in various regions in the world including the Indo-Pacific,” said the ministry, and reaffirmed the importance of trilateral cooperation with Japan.

Choi kicked off a three-day trip to the United States Tuesday for his first meeting with Sherman since she took her post as deputy secretary of state in April.

Ned Price, the U.S. State Department spokesman, said in a statement that echoed the content of the Korean Foreign Ministry’s release that the two sides “reaffirmed the Seoul-Washington alliance as the “linchpin of peace, security and prosperity in Northeast Asia, the Indo-Pacific and beyond.”

He added that the two sides highlighted bilateral cooperation “on shared priorities,” including addressing the climate crisis, addressing challenges in the Indo-Pacific region, strengthening cooperation on global health and secure supply chains, and working toward the denuclearization of the Korean Peninsula.

Sherman and Choi reaffirmed the importance of restoring Myanmar’s path to democracy and “stressed that cooperation between and among the United States, the ROK [Republic of Korea], and Japan is essential to solving global challenges of today and the future.”