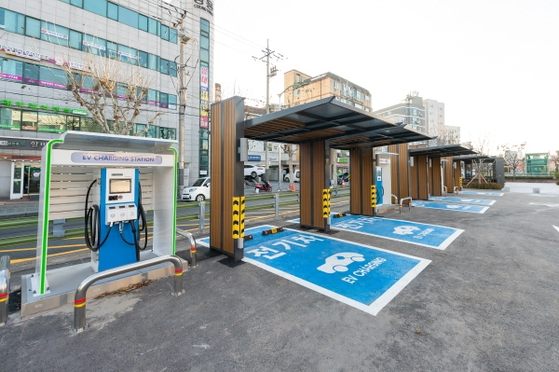 
The Seoul city government is adding another 5,000 electric vehicle (EV) chargers to the city through 2022 to meet the increasing demand for EVs.

“We are searching for the right locations throughout the city with high demand for the EV-charging stations, and we’ll also be taking in recommendations and requests from Seoulites and where they’d like the nearest charging station to be,” Seoul Metropolitan Government announced in a statement Thursday.

At the moment, the city government said it is looking into frequently-used parking lots throughout the city and areas of relatively easy access to drivers.

Requests to install an EV charging station near one’s home can be made to 02-2133-3609, the city government said.

Currently, the city is running around 8,400 chargers at numerous stations throughout the city.

The plan is to add a total of 200,000 rapid chargers for EVs through 2025, as Mayor Oh Se-hoon had pledged during the mayoral by-election in April.

“To meet the surge of demand for electric vehicles, the city will try to have more charging stations available,” said Lee Dong-ryul, head of the city government’s climate change response bureau. “We hope these efforts will help us respond to the climate crisis by reducing fine dust and greenhouse gas emissions in downtown Seoul.”

In April, the Ministry of Trade, Industry and Energy announced a measure to fine those who stay at slow EV chargers for more than 14 hours. Those found hogging individual chargers can be fined 100,000 won ($90), according to the ministry. It also mandated in April that all new public vehicles to be used by the ministry ought to run on renewables. 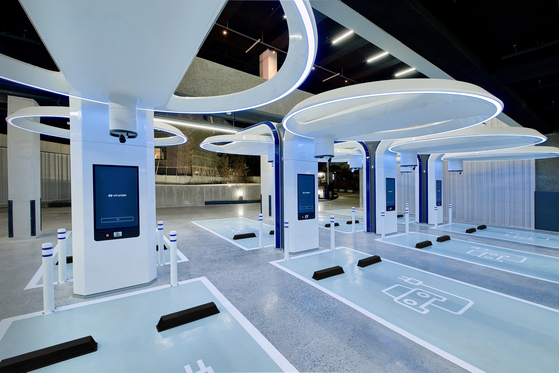 Hyundai Motor's super-fast electric car charging station in Gangdong District, eastern Seoul, which opened in January. Equipped with eight 350-kilowatt electric chargers, an electronic vehicle can be charged to 80 percent within some 18 minutes, according to the company. [YONHAP]

Earlier this year, Hyundai Motor launched ultra-rapid charging stations, called the E-pit, which have a 350-kilowatt ultra-rapid charging system, allowing EVs to be charged to around 80 percent within some 18 minutes, according to the company. The plan is to have at least 12 E-pits on highway rest areas and eight more in cities within this year.

There are around 9,800 rapid chargers in Korea currently, according to the Ministry of Environment. The ministry intends to expand the rapid chargers to 12,000 this year, and to 20,000 by 2030.