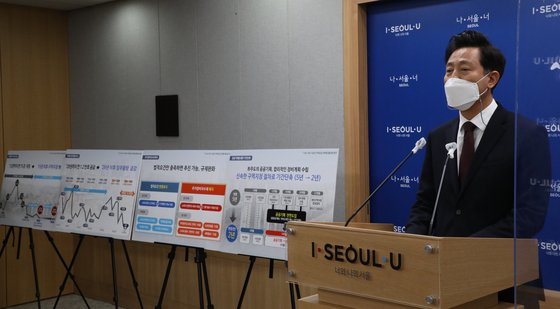 Seoul Mayor Oh Se-hoon announces his plan to lower the threshold for areas in the city to be designated for redevelopment, during a press briefing at City Hall on Wednesday. [YONHAP]


Following up on his pledge to provide more housing units in the city, Seoul Mayor Oh Se-hoon introduced Wednesday a set of measures to relax requirements for old neighborhood redevelopment.

“There have been zero designations of new areas for redevelopment in Seoul since 2015,” Oh said in a press briefing at City Hall on Wednesday. “We need to normalize the redevelopment process in order to supply more housing units to stabilize the market.”

According to the Urban Development Act, the head of a city or county needs to report its plan to redevelop a specific area to the Ministry of Land, Infrastructure and Transport before it can go ahead with its redevelopment plan.

For local governments, the designated area needs to meet a list of requirements decided on by each local government in order to qualify as an area in need of redevelopment.

For Seoul, this included having at least two-thirds of the buildings of an area be older than 20 years, and the area had to be at least 10,000 square meters (107,640 square feet) in size.

For an area to be designated as a redevelopment area, the city government can of course lead research on the dilapidated areas, but the residents can also take the initiative. 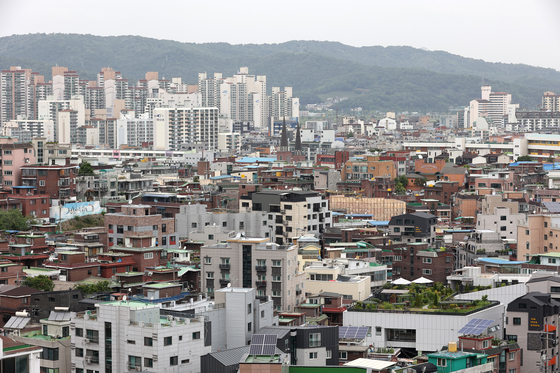 An area in eastern Seoul that is at least 20 years old but until Wednesday had not met city government's other list of requirements to be designated for redevelopment. [NEWS1]


Previously, if a group of residents got together and filed a request to their district office to designate their area for redevelopment, it used to take around five years for an area to be finally designated, according to the city government. About half of this time is spent on back-and-forth communication between the district office and city government on whether an area meets the requirements or not.

The city government said it will now take charge in this process as the main authority, to reduce time spent on the bureaucratic two-year process.

“We think the two years can be reduced to 14 months,” Oh said.

He has pledged to provide some 240,000 new housing units in the city to stabilize the real estate market through 2025.

“The main reason for the skyrocketing housing prices is the lack of supply, compared to demand,” Oh said. “With these relaxed measures on redevelopment, the city government hopes to be able to live up to the promise to provide 240,000 new housing units.”

Oh, elected in the mayoral by-election last month, completes his tenure in June 2022.

Between redevelopment and renewal (KOR)