Vice Minister of Justice Lee Yong-gu admitted that he unsuccessfully pressured a taxi driver to give a false statement to the police to get off the hook for an assault captured in gory detail on video.

Lee is being investigated for allegedly assaulting the taxi driver on Nov. 6, 2020 -- shortly before being appointed vice minister of justice -- and pressuring the victim to lie to the police about what happened. He has also been accused of paying the driver to destroy a video record from the car's black box.

Lee admitted to his unsuccessful attempt to cover up the assault Thursday, following interviews with the taxi driver in the media Wednesday and airing of the video by SBS.

The driver said Lee telephoned him two days after the assault and asked him to lie to the police about what happened. According to the driver, Lee asked him to tell the police that the assault took place after the taxi had arrived at the destination and parked, not while the car was moving, which would constitute a more serious crime. 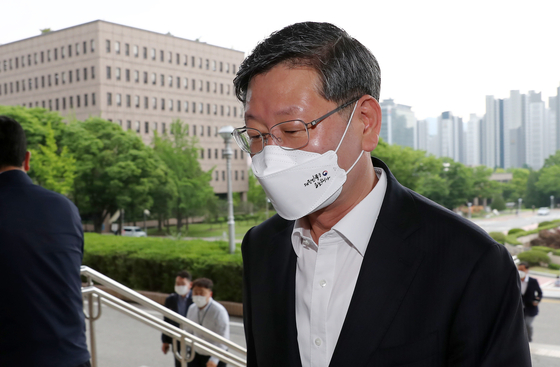 On Wednesday, SBS aired 37-seconds of the video showing Lee hurling insults at the driver and grabbing him by the collar while the vehicle was moving.

According to Clause 10, Article 5 of the Act on the Aggravated Punishment of Specific Crimes, any person who uses violence against or threatens a driver operating a motor vehicle shall be punished by imprisonment with labor for up to five years or by a fine up to 20 million won ($18,000). The police do not require a victim's complaint to launch an investigation.

In a statement to reporters on Thursday, Lee said he paid 10 million won to the driver two days after the incident as an out-of-court settlement. After the payment, Lee admitted that he did try to persuade the driver to give a false account to the police.

"After paying the settlement money, I had a discussion with the driver about what he should say in the victim's statement," Lee said. "Such an arrangement is made from time to time between a victim who received compensation and an offender who tries to lessen his responsibility. But I accept that I deserve criticism for having made such an attempt although I am a lawyer."

Lee said the taxi driver never lied to the police. "He told the police he was grabbed by the collar when he was in the driver's seat," Lee said. "And I believe the case was handled based on this statement."

In the statement, Lee said he agreed to pay an unusually large amount of settlement money for the sake of his reputation, since he was a lawyer and a possible candidate to head the Corruption Investigation Office.

Lee, however, denied media speculation that the money was in return for deleting a key piece of evidence – the black box video from the taxi. Lee admitted that he told the driver to "delete the video," but what he meant was deleting the video from his phone and not distributing it to other people. Lee said he was not asking the driver to delete the original data from the black box.

Lee was recently questioned by police and prosecutors about the assault and admitted it. The Seoul Central District Prosecutors' Office will indict him for attacking the driver of a moving vehicle. Lee is also expected to face an additional charge of pressuring the victim to destroy evidence.

With less than six months in the post, Lee offered his resignation on May 28. According to Blue House Spokeswoman Park Kyung-mee, Moon accepted the resignation around 2:30 p.m. on Thursday. Lee will be formally discharged starting Friday.