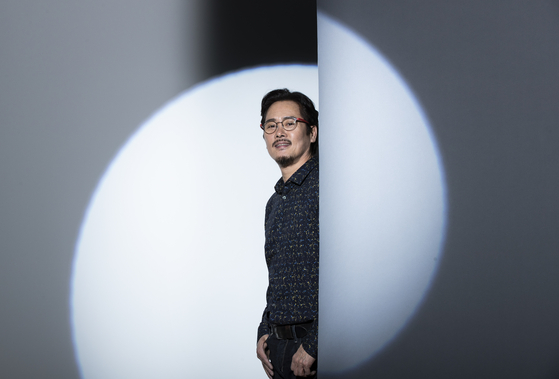 The keyword associated with veteran musical actor Nam Kyung-ju is “diligent.” The 57-year-old actor wakes up at 5:30 a.m. to start a jam packed day of studying, teaching and performing.

The actor who marked his 300th performance in the musical “Wicked” on May 21, thinks he must have been on stage more than 4,000 times throughout his career. He said he never took a break, except for the two years he spent in the United States, and think he's averaged about 100 performances every year.

The actor that never stops trying to refine his performance started to teach students as a professor at Hongik University’s performing arts division. His new profession as a teacher might give people the impression that the veteran actor has a very stable life, but he has yet another role to play.

Nam is also a student in his second semester at Myungji University, where he is earning a doctoral degree in musical. He takes classes to delve more into how to develop musical content and how to direct.

As soon as he wakes up, he goes to his lab to prepare for the lecture he’s supposed to give, collect materials for his own dissertation, and gets ready to make a presentation for his doctoral degree. In the afternoon, he heads to the theater to get ready for his part in “Wicked.”

Whenever he can't complete one of his many tasks, he brings the materials he needs to review so that he can get it done when he has a free moment before he hits the stage.

The actor says his every day is very “boringly regular” to keep his life as simple as possible. Although he can't anymore due to the pandemic, he used to take classes in ballet, tap dance and singing, to help him perform better onstage.

It’s been about 20 years since Nam earned his diligent reputation. Until the 1990s, he was caught up in the love his fans showed him, and spent his spare time drinking.

“I wanted to become an actor when I was in high school because I wanted to be someone cool after I saw my older brother acting on stage,” recalled Nam. “My passion came from picturing what it would be like if I was a celebrity.”

It took about 10 years for him to start being recognized.

The turning point came around Christmas time in 1999. He came back to Seoul after performing by Jeongdongjin beach in Gangwon and was partying with friends to welcome the New Year. The many performances he had been booked to perform in didn't hold him back.

“I got ill right afterward for two days,” he said. “There was a phone right in front of my eyes, but I couldn’t reach out for it. So I had to endure the pain all by myself.”

After that incident he moved back in with his mother and started running every morning.

“Until then, I really splurged all the money I made from performing onstage,” he said. “Such lifestyle exhausted my body and mind, and I started to think that my life could end abruptly and I would not be able to live a good life or become a better actor.”

“You need to sweat and shed tears. You need to train your body even to the point when you feel pain. Then you will be able to work well with music when you dance on stage, and really learn all the emotions that your co-star is experiencing when you are acting together,” said Nam.

“This is something a person who really partied to an extreme level can say,” he said with a laugh.

Even now, he sticks to his tight schedule. He hopes that continuously sticking to such routine will inspire others to do the same.

“I just want other actors to think that they should at least try to take on a challenge because I continue to do lots of work in a very good condition,” he said.

Even during the times when stage performances were all canceled due to the Covid-19 pandemic, he voluntarily participated in events he could contribute his talents to.

After “Big Fish” wrapped in February last year, he was set to take part in the musical “Mamma Mia!,” but it was canceled. That gave him about nine months without being on stage at all. During that time, he met with government officials to share the difficulties the musical industry was dealing with, and even worked as an emcee when there was a press conference called by those working in the musical industry.

“Since I grow thanks to my time on stage, now is the time I should return my gratitude,” said Nam.