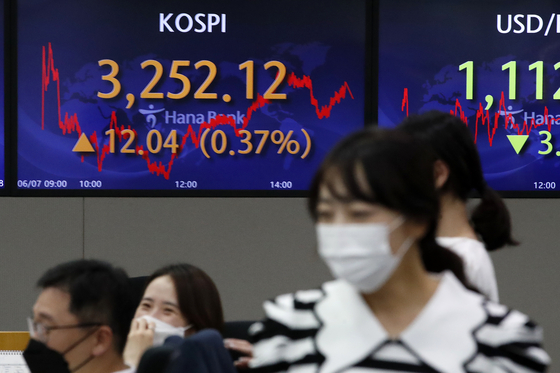 
The stock market closed at an all-time high Monday as weaker-than-expected U.S. jobs data helped ease concerns over the potential rollback of the country's expansive monetary policy. The won rose against the dollar.

The Kospi got off to a bullish start as investors were relieved that an increase in U.S. non-agricultural jobs in May turned out to be slower than the market consensus.

The key stock index snapped its winning streak in the previous session ahead of the data's release, largely due to investors’ concerns that a fast job increase may prompt the Federal Reserve's discussion on tapering its asset-buying program as early as this month.

"Whether the Kospi will continue its upward move or not will be determined after [U.S. consumer] price data and the U.S. Federal Open Market Committee [FOMC] meeting results come out next week," Hana Financial Investment analyst Lee Jae-sun said.

The local currency closed at 1,112.9 won against the dollar, down 3.6 won from the previous session's close.