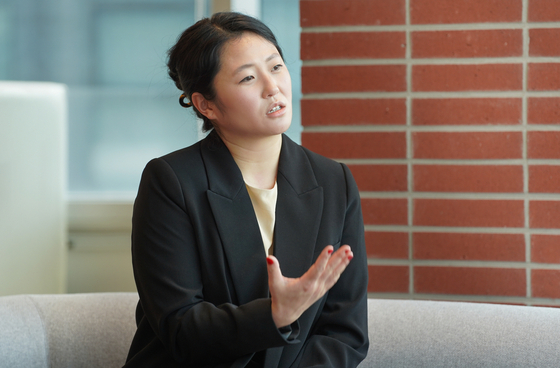 Filmmaker Sun Hee Engeltoft sat down for an interview with the Korea JoongAng Daily on Wednesday at its office in Sangam-dong, western Seoul, for her documentary "Forget Me Not — A Letter to My Mother."[JEON TAE-GYU]


When Sun Hee Engelstoft, a Korean-Danish filmmaker, decided to make a documentary in Korea, she had planned for it to be a happy tale about a young woman's journey to becoming a mother.

“The whole process, it’s been like opening Pandora’s Box,” the 38-year-old filmmaker said in an interview with the Korea JoongAng Daily for her debut documentary “Forget Me Not — A Letter to My Mother” at its office in Sangam-dong, western Seoul, on Wednesday. “Every time I started filming a woman or following her story she had strong convictions that she wanted to keep her child, but it always ended up working out differently.

“I’ve never met a woman who actually wanted to give away her child and that was very surprising to me because in the West, everybody has this idea about Korean women that they just easily give away their children because there are so many adoptees. I found out that this was not true,” she continued. “And maybe it’s very logical actually, that biologically and naturally if a woman gives birth she naturally wants to keep it.”

Engelstoft started the project because of her own experience. Engelstoft, born Shin Sun-hee in Busan, was only four months old when she and seven other babies were adopted by families in Denmark in 1982. Her birth mother, Shin Bok-sun, was 19 when she signed the papers to give up her baby for adoption, even before she was born. Engelstoft is one of about 210,000 Korean children who were adopted internationally since the Korean War ended in 1953. 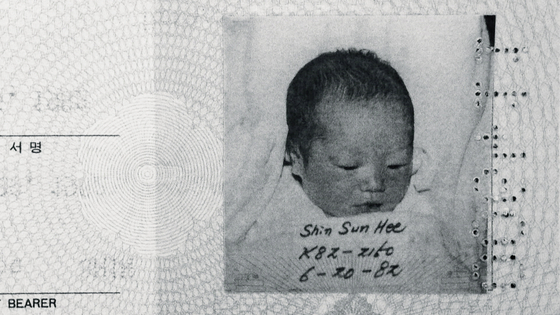 A photo of Engelstoft's passport before she was adopted by a Danish family. Her Korean name was Shin Sun-hee, and she took her last name from her mother. [CONNECT PICTURES]


“When my adoptive mom held me for the first time, I didn’t respond to her so she thought that I was deaf,” Engelstoft said, describing the moment when she first met her new family. “There were some Korean nurses on the plane as well to care for the babies, and she asked one of the nurses to come over to talk to me. She [the nurse] communicated something with me in Korean and then I smiled, so then she knew I wasn’t deaf.”

The filmmaker remembers always trying to fit in during her childhood.

“When I would walk down the street in the village — there were only 2,000 people in the area — people wanted to touch my hair because it was so different,” she said. “So I always had a problem going to hairdressers, (laughs), because it’s just different from Scandinavian [hair].”

Engelstoft said she grew up dealing with prejudices and stereotypes related to being an adoptee, as well as being Asian.

“People would shout in the streets or I would get kicked out from stores,” she said. “But I just didn’t think about it much before I came to Korea for the first time in 2002, when I was 20 years old, and it was just such a big surprise that there was this whole country. I’d never been to any Asian country so I just loved that I was anonymous, that nobody stared at me, and people just took for granted that I was Korean. They would speak Korean to me and just assume that I’m Korean, and that made me really happy.”

Her first trip to Korea marked the beginning of her search for her biological mother. She learned that she had been adopted from Namkwang Children’s Home and the signature on her adoption papers was Shin Bok-sun. Within two days, the police found three women with the same name, one of whom admitted she had given up a child for adoption. But after starting her own family, she declined to meet the 20-year-old Engelstoft.

“I was totally devastated about that,” she said. “I mean, it broke my heart completely. I was coming from not even knowing that I wanted to search for her and to get a rejection like that was just insane. I was 20 years old so I was very vulnerable.”

The shelter’s director said that he would be able to get more information about Engelstoft's mother if she was willing to make a “donation.” Engelstoft declined and left, but it made her question the credibility of the information that had been given to her.

“I went to the adoption agency, the orphanage, the police, and none of these places that have great authority were able to help me, so after making this film I think the only truth I can get is when I meet my mother in person,” she said. “Because everybody is too involved, there’s too much at stake for them to be willing to share the truth.” 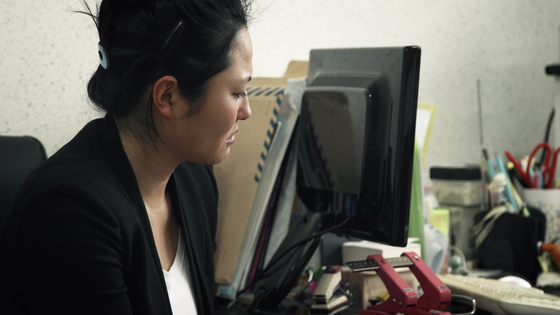 A shot of Engelstoft from the film asking the director of the Aesuhwon shelter for single mothers, to look into her files for her. [CONNECT PICTURES]


Despite not being able to meet her in person, the filmmaker still wanted to understand her mother. She began scouring for a shelter for single mothers, a place which allowed her to film but remain independent from adoptive agencies so she could actually see the decisions and choices the mothers make and what prompted them to give up their babies.

Her search led her to Aesuhwon shelter for single mothers located on Jeju Island.

What is evident throughout the film is that the love the expectant mothers feel for their babies is often faced with opposition from their families.

“It’s not really one woman’s choice,” Engelstoft said. “It seemed like their families had incredible power and control [over them]. The grandparents, the parents, even the extended families, aunts and uncles. I mean also like hospitals, schools, universities, workplaces, it’s incredible how much [influence] they actually have.

“So everything was just very difficult for me to understand actually because the wish of the women to keep their child was so strong, but it never seemed to actually happen and that made me incredibly sad,” she said. “I thought, the film was shot mostly between 2013 and 2014 and if this is how the situation is now for women in Korea, then how was it in 1982 when my mom gave birth to me? So it was really eye-opening and devastating at the same time to learn all of this.”

During the filming, which ended up taking place over a year and a half period, Engelstoft stayed at the shelter 24/7, allowing her the chance to bond with the women there. The most frequent question she was asked by the residents was, “Are you happy?”

“I’d never heard [that question] before, so it was mind-boggling to me,” she said. “I didn’t want to interfere with their decisions [...] I’d tell them that I wish I knew my mother. I wish that I could go and visit my mother and be together with her, and that’s actually still all that I want. She is also the key figure for me to find out who my father is and I don’t have that information [...] She’s the only person who knows that.”

The filmmaker also questioned Korea's 70-year-old history of adoption. Engelstoft remarked that “instead of building on the infrastructure, supporting their population and taking care of our own children, they have been sending the problems away.”

“What is happening right now is that in the Netherlands, in Sweden, there are appointed committees from the governmental investigative committees to look at the adoption industry or area and see if the process is actually good or not,” she said, criticizing the lack of independent governmental organizations for adoption in Korea.

“I also think that childbirth registration is really problematic,” she said. According to Article 46 of the Act on Registration of Family Relations, registration for a child born out of wedlock “shall be filed by the mother,” but if the mother is unable to register the child, relatives living together, or even the doctor or midwife, or any other person involved in the delivery can file the registration.

"What I learned from the stories from Aesuhwon was that people who are not actually the rightful parents of the child can register themselves as parents, so I think it’s problematic when it comes to finding out the truth about an adopted child."

After her stay in Korea, Engelstoft was left with 350 hours of footage. She initially assumed that it would take her two years of post-production work to complete her film. Instead, what started off as a personal journey to understand her mother became something more, and took eight years to finish.

“I felt obligated to not talk about my story — there’s nothing really that interesting about my personal story, it just resembles so many other adoption stories — it’s more about the women’s issue and children’s issue that I’ve seen up close,” she said. “To see the trauma it inflicts on families, not just the mothers, but everybody who is involved with the separation. 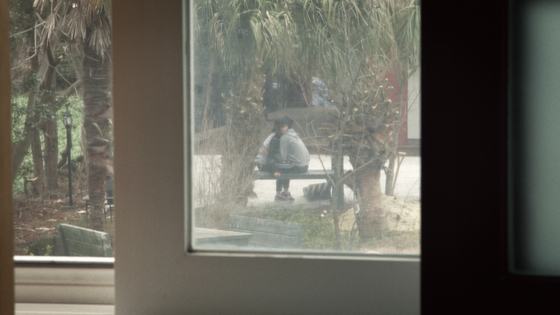 A scene from the film in which a soon-to-be teenage father visits his pregnant girlfriend at Aesuhwon. [CONNECT PICTURES]


“I think that [showing] kindness is the answer,” she continued. “I know it sounds vague, but kindness toward each other, not being prejudiced about women or judging them. If somebody has a different life than you, you just have to expand your concept of what a family can be.”

“Forget Me Not — A Letter to My Mother” is currently screening nationwide at local theaters, but it will not be made available via internet protocol television (IPTV) or any other streaming platforms to protect the privacy of the mothers who appeared in the film.