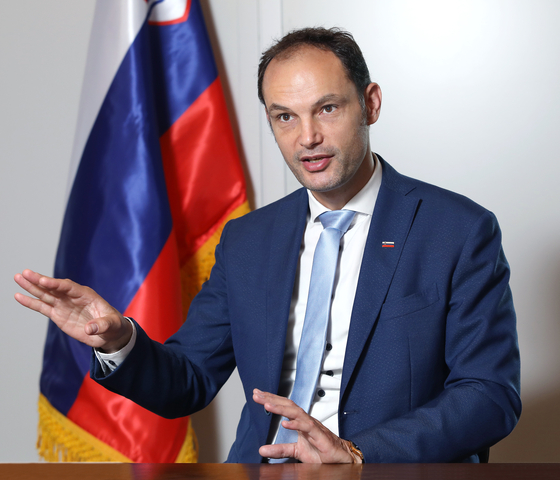 Slovenian Foreign Minister Anze Logar sits for an interview with the Korea JoongAng Daily at the Lotte Hotel in central Seoul on Monday morning. Slovenia will launch its new embassy in Korea this summer, he said. [PARK SANG-MOON]


Slovenia is set to open its embassy to Korea “in the coming weeks,” the Central European country’s foreign minister said Monday in his first visit to Seoul, in an effort to enhance exchanges ahead of 30 years of diplomatic relations.

“When I was sworn in as foreign minister a year ago, I thoroughly checked the network of our embassies around the globe, and I saw that there were some blind spots,” said Slovenian Foreign Minister Anze Logar as he sat for an interview with the Korea JoongAng Daily at the Lotte Hotel in central Seoul. “The European Union is talking about the urgent importance of the Indo-Pacific region. If you look geostrategically, Slovenia is perfectly positioned for the sea corridors from the countries of the Indo-Pacific region, and as we are not very much represented in the region, we decided to open an embassy in Seoul.”

This marks the first visit by a Slovenian foreign minister to Korea since 2015. The Slovenian government decided on Dec. 23 last year to open an embassy in South Korea. Previously, the Slovenian Embassy in Japan has been overseeing Korea matters.

Slovenia has already designated its first ambassador for Korea, who arrived in Seoul last week in order to prepare for the launch of the new embassy and finalize its location, said Logar, a former lawmaker in the Slovenian National Assembly.

“We look forward for help from Seoul’s Ministry of Foreign Affairs to facilitate all these administrative issues and to be able to open the embassy as soon as possible,” he said, hopefully within the next one or two months. “We are in the final phase of opening the embassy.”

Korea has a “buoyant economy, with modern technologies,” Logar said. “Slovenia is investing heavily in modernizing our economy. We have a very educated workforce, which could be a valuable source for direct investments from abroad. In that sense, we would like to do everything we could to combine all these factors in order to enhance bilateral exchanges and investment in Slovenia. We see it as a window of opportunity, a window of cooperation, to help our companies to enter the Korean market.”

During his two-day visit to Seoul, Logar is set to meet with Korean Foreign Minister Chung Eui-yong and visit the National Assembly and meet with lawmakers including the chairman of the Korea-Slovenia parliamentary friendship group. He will also meet with representatives of the Chamber of Commerce and the Korea Trade-Investment Promotion Agency (Kotra).

His delegation includes the chief executive officer of Port of Koper, Slovenia’s main logistical center for bringing goods from all around the globe to the country and the European Union.

Bilateral trade in 2018 was more than 400 million euros ($486 million), he said. Slovenia's direct investment in Korea amounted to 3 million euros in 2019. Slovenia’s Ministry of Economic Development and Technology has included Korea among its priority markets in its five-year plan to promote internationalization for the first time.

“Korea for Slovenia is the fourth main market in this region, and it's even more important than, for example, Japan,” said Logar.

He noted that Slovenia is “investing very heavily in new technologies” and especially focused a recovery fund and a green and digital transition as a member of the European Union.

Slovenia can offer Korean companies a quality workforce, infrastructure and links to regional markets, the minister added, pointing to opportunities to especially expand cooperation in the economic, scientific and technological fields.

Glovis Europe Koper Branch manages the supply chain for Hyundai and goods on their way from Korea to Central Europe.

Slovenian company Kolektor acquired a Korean commutator manufacturer a few years ago, and Kolektor Sinyoung Industrial's electrical wand parts are present in 90 percent of the vehicles produced in Korea.

Slovenia assumes the presidency of the Council of the European Union in the second half of the year and plans to play an important role coordinating areas like the green transition following the Covid-19 pandemic while preparing for the United Nations Climate Change Conference, or COP26, in November in Glasgow, Britain.

“We will be the presidency that will coordinate the final declaration of the COP26 conference on this green transition in Glasgow,” said Logar. “We will be in very intense contact with all interlocutors, all polluters in the world, in order to find the final declaration that will offer a tangible improvement in our mutual efforts to combat change. In that sense, we will be in contact with the Korean side.”

He continued, “I am glad to hear that you are heavily marching toward this green transition, trying to avoid coal and dirty industries for the good of our future generations. For example the EU in its green transition path is a market leader, so we have a lot to offer, to show best practices and to present how our industry transformed into a greener one.”

Slovenia will “promote heavily during our presidency the idea that this is not a cost, it's about a need for our future generation,” stressing that a “green transition is a core issue in every 27 member state” of the EU.

Ahead of his trip to Seoul, the minister said he spoke with Josep Borrell, high representative of the European Union for foreign affairs and security policy, on issues to discuss with Korea such as visa-free entries.

In February 2019, Pahor awarded Korean President Moon Jae-in with Slovenia’s highest state decoration for his "invaluable contribution to reconciliation and peaceful coexistence on the Korean Peninsula.”

“Slovenia is coming from an ex-war zone,” said Logar, recalling the Ten-Day War that followed Slovenia's declaration of independence from Yugoslavia in 1991 and the brutal Yugoslav Wars in its vicinity.

He continued, “We know from heart how importance peace is for the well-being of your fellow citizens. We always support such initiatives.”

Logar said his president extends an invitation for Moon to visit to Slovenia to receive the decoration “in person” noting that the peace initiative helped to “enhance and spur talk about reconciliation, cooperation and the peace process” on the Korean Peninsula.

There is currently no direct flight between the two countries, but Logar pointed out that Slovenia became a hot destination for Korean tourists especially after the popularity of the 2017 Korean drama "Black Knight," which was filmed in various locations in the country. In 2019, around 139,000 Koreans visited the Central European country.

“The beauty of Slovenia is that you have everything on a 100-kilometer [62-mile] distance,” he said. He described a “picturesque” seaside, mountains, flatlands, spas and a “pristine agricultural community that is not spoiled by industrialization,” including small private wine caves.

He added, “We would like to convince Kotra to open its agency in Slovenia. I think this would be a valuable proof of this enhanced cooperation. We will continue with this bilateral exchange of views and possible chances for further cooperation in the coming months.”

Logar said, “In the past 30 years, we did not acquire the level of cooperation we could, and we should, have. It's one of the reasons why I want to enhance this cooperation with the formal opening of the embassy here.”

He invited Koreans to “explore Slovenia,” saying he expects the opening of a new embassy will help bilateral relations to “snowball” into something bigger.

“Do you know how you can easily remember Slovenia?” he asked. “This is the only country that has 'love' in its name.”

“This is the first visit [by a Slovenian foreign minister] in six years” he said. “I see it as the starting point of a very fruitful and long-lasting dialogue between Slovenia and Korea.” 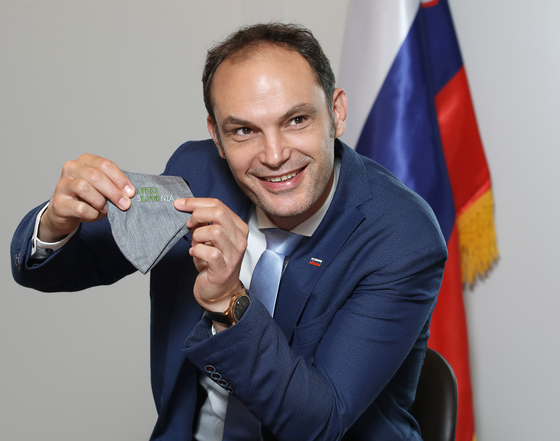 Slovenian Foreign Minister Anze Logar points to the letters on his mask and explains that Slovenia is the only country that has “love” in its name in an interview at Lotte Hotel in central Seoul Monday. [PARK SANG-MOON]