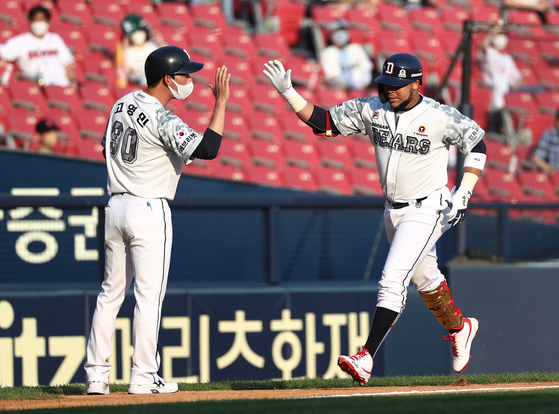 Jose Fernandez of the Doosan Bears rounds the bases after hitting a home run agains the SSG Landers at Jamsil Baseball Stadium in southern Seoul on Sunday. [YONHAP]


The SSG Landers held on to an increasingly narrow lead in the KBO after another week of baseball, with just two games now separating the top six teams.

The Landers' lead grew slimmer over the weekend as they dropped their series two-games-to-one to the fourth-place Doosan Bears.

The Bears just edged out the Landers in three close games that saw the two teams fairly evenly matched despite their different places in the table. Doosan took the first game 3-2 and the second 8-5 before SSG came back to win the rubber match 4-1.

While the Landers hold on to a sole lead, Doosan are now one of three teams tied for fourth, just two games behind the leader. Going into Sunday's games, all six top teams were within one game of each other.

The LG Twins and the Samsung Lions are tied in second, one game behind the Landers. The Twins won their weekend series against the eighth-place Kia Tigers, dropping the first game before coming back to take the series: 3-4, 8-2, 10-0.

After starting the season at the very bottom of the table, the Heroes have gradually climbed back up the table but have struggled to make it out of seventh place, a sort of limbo land where they are separate from the increasingly distant bottom three teams, but unable to break into the competitive top six.

The NC Dinos and the KT Wiz join the Bears in fourth place. The Dinos took on the ninth-place Hanwha Eagles over the weekend, winning their first two games — 6-3, 6-1 — before losing a high-scoring final game of the series that the Eagles took 13-10.

The Wiz join the Landers as the only other high-ranking team to lose their weekend series, taking a surprisingly decisive loss to the tenth-place Lotte Giants.

Despite a disappointing start to the season, the Giants, now 10 games behind the Landers, have managed to maintain a .500 winning percentage against the Wiz, the Bears and the Heroes. That edge over specific teams worked to Lotte's advantage over the weekend, as they beat the Wiz: 15-0, 1-8, 8-7.

The Landers are starting to look like something of an anomaly in the KBO, as they hold on to first place without having to rely on a single outstanding performance from any individual player.

The league's hitting tables are still dominated by the NC Dinos, who used their slugging prowess to win the pennant last season. Those same bats are just as dominant this year, but they haven't been able to lift the team out of fourth place.

The Landers also don't appear on the top three tables for pitching, dominated by the Bears. Instead, the Incheon club is holding on to the top spot through a solid team performance, rather than a few individual stand-out stars.

There were two lineup changes in the KBO this week.

Lively has pitched for the Lions since 2019, but has been struggling with a shoulder injury.

The Landers have also brought in some more foreign firepower, replacing the injury-ridden Artie Lewicki with former major leaguer Sam Gaviglio, who will reunite with former Toronto Blue Jays teammate Wilmer Front on the Landers bench. 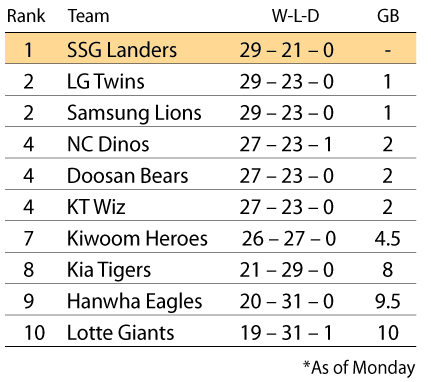 The KBO returns Tuesday as the Dinos head to Seoul to take on the Twins, the Wiz visit the Landers in Incheon and the Bears travel to Busan to take on the Giants. The Tigers and the Lions will face off in Daegu, while the Heroes travel to Daejeon to try their luck against the Eagles.