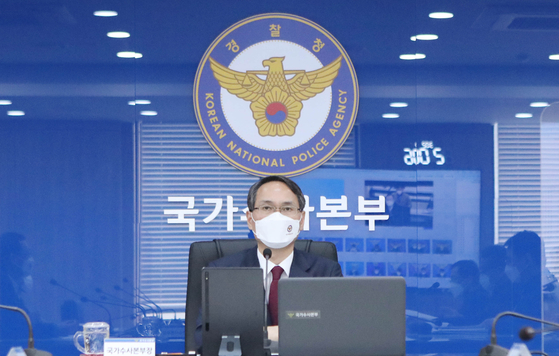 Nam Gu-jun, head of the National Office of Investigation of the national police, in a meeting at the office headquarters in Seoul in March. [YONHAP]


Police are investigating a group of swindlers who used a cryptocurrency Ponzi scheme to scam some 69,000 people of nearly 4 trillion won ($3.6 billion).

Gyeonggi Nambu Police Agency announced Monday that it has booked some 70 employees, including the CEO, of V Global, which police said tried to pass as a cryptocurrency trading platform, for fraud and other charges.

“They tried to imitate a cryptocurrency trading platform, but in actuality they appear to have been running an illegal Ponzi scheme on the investors,” a police officer told the JoongAng Ilbo. “We are still investigating the case, and we expect to identify more suspects [in addition to the ones currently booked].”

According to the police, V Global scammed people by telling them that they can open a cryptocurrency account and invest a minimum of 6 million won, to receive back three times that amount in a short span of time.

Scammers robbed the investors of some 3.85 trillion won this way, according to police.

The investigations have been expanded nationwide, the head of the National Office of Investigation of the national police announced last month, due to the increasing number of reports coming in from victims all over the nation.

But they have hit a snag recently, police said, because some victims of the scheme are refusing to report the case to the police.

“I’ve told my mother that she ought to report the case to the police,” said a man in his 40s whose mother has allegedly been robbed of 13 million won by the group. “But she thinks she can get the money back, three times the amount she has invested, just like the group has promised her. So she is refusing to report them. And I think she’s not alone among the victims — I heard many of them were elderly people who are new to the concept of cryptocurrency.”

According to the man, his mother has recently been asked by the group if she can sign a paper that says she has not been scammed by the group.

“A few days ago, on June 2, they sent her a text message alleging that no one in the company is being investigated by the police,” he said. “They keep telling the investors to wait and see, to prevent them from reporting them to the police.”

Some of the investments were made through a pyramid scheme, which, some victims say, makes it harder to report the case to the police.

“I invested some 60 million won after a long-time acquaintance of mine told me about the deal,” a woman in her 50s told the JoongAng Ilbo. “My acquaintance assured me that if anything happens, I would still be able to receive back the initial investment. Now I told her that I’d like to report the case to the police but she is asking me to wait a little longer, to receive back the money [tripled as promised], and even questioned our friendship when I continued to hold doubts. I’ve been delaying reporting the case to the police.”

“We ask all those who invested in the company to report the case to the police as soon as possible, so we can determine the extent of the [alleged] fraud,” a police officer said.