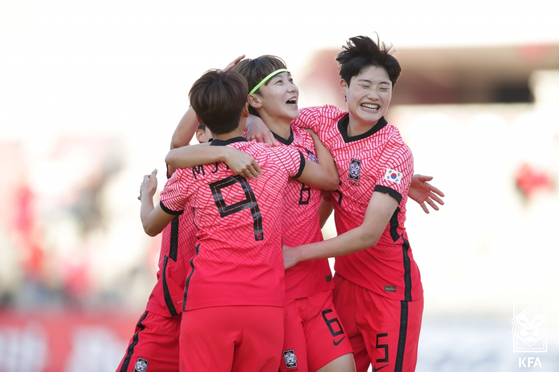 The Korean national team celebrate winning their first friendly against New Zealand at Goyang Stadium in Gyeonggi on Saturday. [NEWS1] 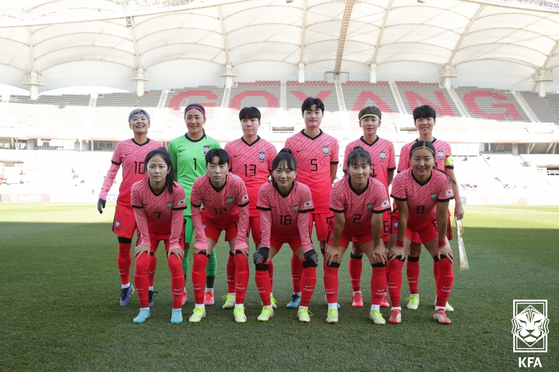 The Korean national women's football team pose for a picture ahead of their first friendly against New Zealand held on Saturday at Goyang Stadium in Gyeonggi. [NEWS1]


The Korean women's football team will face New Zealand at Goyang Stadium in Gyeonggi on Tuesday at 7 p.m. for a second friendly.

The first friendly took place on Saturday when Korea took a 2-1 victory during a match also played at Goyang Stadium. It was the first time that the women's national team were back playing at home since April of 2019 when Korea faced Iceland.

New Zealand opened the scoring in the 25th minute, with Jacqui Hand slotting in the first goal of the match. Korea was unable to even the score in the remainder of the first half and the whistle blew with New Zealand leading 1-0. After the break, in the 59th minute, Choe Yu-ri crossed the ball over to Choo Hyo-joo, before New Zealand's Meikayla Moore scored an own-goal, Korea's first of the match.

Then in the 90th minute, Cho So-hyun dribbled past the New Zealand defense and sent a cross with her left over to Lim Seon-joo who headed in the winning score. The goal marked Lim's sixth, during her 85th national team match which fell on her 31st birthday.

"In the second friendly, we will focus on making up for our shortcomings in the first friendly."

The two friendlies offer another chance for the national team to warm up ahead of the 2022 AFC Women's Asian Cup, which kicks off on Jan. 20. At the Asian Cup, Korea have been drawn in Group C alongside the two-time defending champion Japan, Vietnam and Myanmar. With the top two teams advancing to the knockout stage, the Korean squad will be expecting to advance with wins against the weaker Southeast Asian teams. The two-best third placed countries will advance to the quarterfinals.

The top five teams of the AFC Asian Cup will play in the 2023 FIFA World Cup co-hosted by New Zealand and Australia while the next two countries will play intercontinental playoffs. Korea have qualified for the last two FIFA World Cups and comfortably earned their seat in the AFC Asian Cup despite having missed out on qualifying for the Tokyo Games.

New Zealand are currently ranked five spots below Korea at No. 23, providing a good tune-up opportunity for the Korean squad. The last time Korea faced New Zealand before Saturday's match was in March of 2019 in the final game at the Cup of Nations in Melbourne, Australia, taking a 2-0 win thanks to second half goals from Ji So-yun and Moon Mi-ra. The two sides have now faced each other 12 times, with Korea winning six of the matches, drawing five and losing only once.