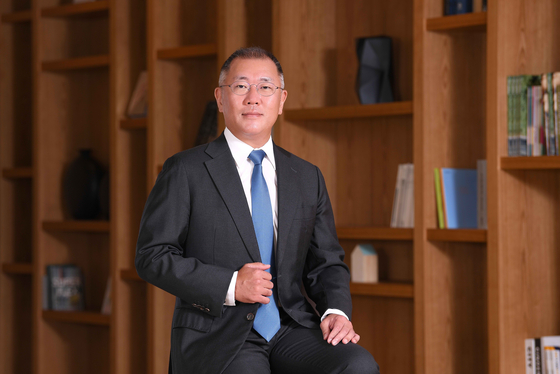 In the past year, his major focus has been on making the auto giant more sustainable by addressing climate issues and developing cleaner and more convenient forms of transport for the future generation.

"For a sustainable future, we have to overcome difficulties the current generation is facing," Chung said in July on a business trip to the United States, according to a statement by the auto group released Monday.

Hyundai Motor announced last month that it will achieve carbon neutrality by 2045. Five Hyundai units -- Hyundai Motor, Kia, Hyundai Mobis, Hyundai Wia and Hyundai Transys -- announced in July that they are joining the RE100 campaign, a global initiative encouraging businesses to only use renewable electricity by 2050.

The auto group has been leading Korea's transition towards a so-called hydrogen economy, in which hydrogen serves as a major source of energy.

The group announced last month during a "Hydrogen Wave" forum that all new commercial vehicles launched by Hyundai Motor and Kia -- such as buses and heavy duty trucks -- will run on fuel-cell and electric batteries from now on and all existing models will be given fuel cell systems by 2028.

"We aim to help foster a worldwide hydrogen society by 2040," Chung said during the forum.

Chung also led the establishment of a 15-member council dubbed the Korea H2 Business Summit last month along with Posco and SK Group. The council is supposed to promote the country's transition towards a hydrogen economy by helping member companies develop hydrogen-related technologies and attract partnerships and investments from overseas.

Another of Chung's ambitions is to bring innovation to transportation with top-notch technologies, to make traveling stress-free in the future.

Robotics, autonomous driving and urban air mobility technologies are at the center of those innovation ambitions.

"Our mission is to offer sincere services to take the human race to whichever places it wants to move to, free of stress," Chung told employees of the group's urban air mobility business unit, the group said in a statement.

It is also making progress in robotics technology after acquiring an 80 percent stake in robotics company Boston Dynamics last year. Being the first acquisition after Chung was inaugurated as chairman, it was a part of his attempt to make the group a future mobility provider rather than just an automaker.