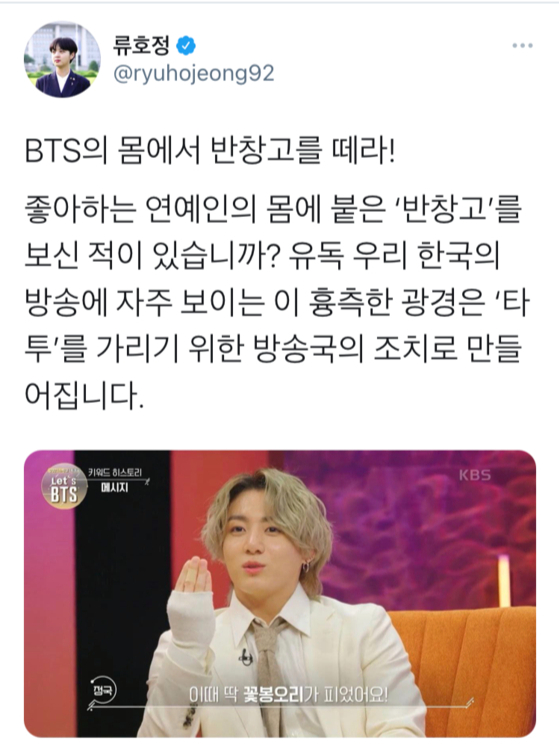 Justice Pary Rep. Ryu Ho-jeong's Instagram post announcing that she is drafting a bill that would liberalize tattooing. [SCREEN CAPTURE]


A social-media mob has descended upon Justice Party Rep. Ryu Ho-jeong, 28, after she published posts in support of a bill she is drafting that would liberalize tattooing.

Tattoos are not illegal in Korea, but tattooing must be done by a medical professional, greatly limiting the availability of relevant services. Displaying a tattoo is also allowed under the law, although Korea Communications Commissions has set a standard to blur them on shows and artists appearing on television will often cover them with tape.

"Take the tape off of BTS," the politician wrote on social media. Photographs of BTS member Jungkook with tape covering tattoos on his arms and hands accompanied the comments. "Have you ever seen tape on your favorite celebrity's body? This is a hideous sight, which is often seen on Korean television as it is the rules of the broadcasters not to expose tattoos."

Anonymous critics on social media complained about the posts by Ryu, saying she was "using the popular K-pop artist for politics."

One asked Big Hit Music, the agency that represents BTS, to "do something to protect their artist" as the politician is "using Jungkook's image to promote a law in Korea, using his picture without his consent."

"You could have expressed your objective in a different way. It is not pleasing to see that you are using the fame of BTS in such a way," another wrote.

"Although I support the bill, using him to grab attention is not cool," another post read.