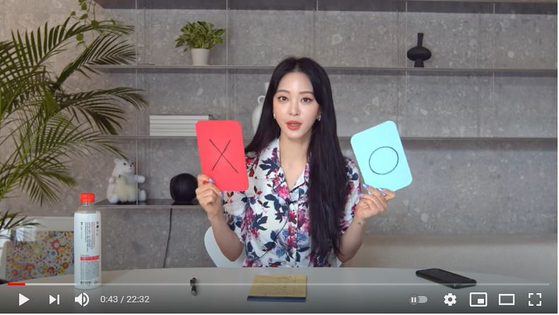 Actor Han Ye-seul goes through the allegations surrounding her one by one in a video titled, ″Let me tell you EVERYTHING″ posted on her YouTube channel on Wednesday. [SCREEN CAPTURE]


Actor Han Ye-seul uploaded a video titled “Let me tell you EVERYTHING” on her YouTube channel on Wednesday, refuting nearly all the allegations that have been circulating about her.

In the video, which is about 22 minutes long, the actor goes through the allegations one by one, with the help of two cutting boards with an “X” and an “O” written on each one to either acknowledge or refute them.

Most of the allegations surrounding Han, which include that her current boyfriend, whom she revealed on her Instagram last month, had worked as a male escort and that she slapped Jennie, a member of Blackpink, were made in videos by far-right YouTube channel Hover Lab hosted by lawyer Kang Yong-seok and ex-journalist Kim Yong-ho late last month.

“I’m so glad and relieved to finally let it all out,” she said before beginning to address the allegations.

The first allegation she tackled was that she went out with “a chaebol (a word Koreans use not only to refer to a conglomerate but also to a member of a wealthy clique) in the past” and that he bought her a Ferrari. She said this claim was true and questioned what was wrong with receiving expensive gifts from a rich boyfriend.

Han, however, criticized the two hosts of Hover Lab for saying that she could “date rich men because she was young enough back then,” which was a “clear degradation of women.”

“I’m so not happy with that and I was uncomfortable hearing them scoffing as they make such comments,” she added. "I dated a guy who was rich and received gifts because I was his girlfriend."

Han also refuted allegations that she had slapped Jennie for dating her ex-boyfriend Korean-American rapper and producer Teddy, saying she’s never even met the girl group member and adding that the YouTubers “love making up bizarre stories.”

The actor also said she decided to take legal action after the YouTube channel accused her of using drugs in the Burning Sun nightclub.

“People have been telling me not to respond so I wasn’t going to but it’s a different story when they associate me with the Burning Sun scandal and make me look like a drug addict,” she said.