This Zuckerberg is all about K-pop, NFTs and chimaek

This Zuckerberg is all about K-pop, NFTs and chimaek 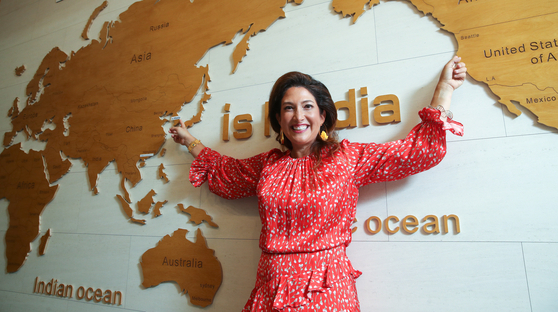 Randi Zuckerberg poses for a photo at the isMedia office in Anyang, Gyeonggi, on Tuesday. [WOO SANG-JO]


Randi Zuckerberg, born in 1982, studied psychology at Harvard University and took a job at a marketing firm before joining her brother, Mark, at Facebook in 2004.

As director of market development, she played a pivotal role in making Facebook into the tech behemoth it is now. Zuckerberg has left the company to pursue her own business aspirations, some of them with a connection to Korea.

As a non-executive director of and strategic advisor to Kosdaq-listed isMedia, she plans to create a non-fungible token (NFT) platform for K-pop content, where fans can own digital originals of star photos or videos.

An NFT is a blockchain-based proof of digital-asset ownership.

isMedia and Hyundai Asset Management will form a special purpose vehicle (SPV) to develop and invest in metaverse and NFT-related projects.

Zuckerberg’s interest in creating an NFT platform specifically for K-pop comes from her acquaintance with Korean culture.

“I was happy to be in a country that loves karaoke as much as I do,” said Zuckerberg. “I was clearly born in the wrong country.”

When asked if there’s anything she likes to do during her visits to Korea, Zuckerberg immediately said she always has to “eat bingsu, and if I have to pick a second thing, we’re going to have delicious fried chicken and beer.” Bingsu is a shaved ice dessert. Her favorite K-pop groups are Blackpink and BTS. Signing her book “Pick Three,” Zuckerberg wrote that she would choose bingsu, NFTs and BTS as her “three picks” for the day — one of the daily practices she recommends in the book is making three picks each day.

This is Zuckerberg’s fourth visit to Korea. Her memories from previous visits, including the 2017 startup festival in Korea, are posted on her Instagram story highlights, with Korea being the only country to have its own a section on the social media page.

“K-content is one of the most valuable types of music and entertainment that is out there, and [Korea’s] interest in technology is also very high,” said Zuckerberg. “A lot of my knowledge is in consumer technology, social media and marketing, and I think it’s a really good partnership.”

Not being scared to dive into new realms of technology is one of Zuckerberg’s strengths. When people were Googling what an NFT is, she jumped in and created an NFT herself. While taking a picture for the newspaper, she even made a remark about making the photo into an NFT.

“This is the future of digital ownership,” said Zuckerberg. “In the future, we’re all going to own things that are both virtual as well as physical.”

Zuckerberg sat down with the JoongAng Ilbo at isMedia’s office in Anyang, Gyeonggi, on Tuesday to talk about her future plans and her work ethic.

Q. Can you tell us about some projects on the NFT side?

A. There’s a lot of different things we’re looking at. NFTs are exciting, but I think we need to focus on how to make it easier for people to get NFTs. People might be excited to own something from their favorite band, but they may not know how to buy crypto, how to purchase an NFT or where it lives. You have to invest in the whole ecosystem to make it work, thinking about payment methods, blockchain, and everything else in order to make it accessible to more people. We're really casting a wide net in any interesting companies and entrepreneurs that fall into the space where live entertainment meets technology.

What is it like to be Mark Zuckerberg's sister?


I think working alongside my brother was an amazing opportunity. He’s such a great leader, and it really enabled me to see the value that technology has, and how it can change people’s lives.

You must be tired of hearing questions about your brother.

I'm lucky we have such a great relationship, but I think there's a lot of women in the world who are judged by men in their lives about what their husband does, or what their brother does. I'm very proud of my brother, but my goal is to be my own woman and to help inspire other women to feel like they don't just have to be seen as someone's sister or someone's daughter.

You seem to be very interested in and focused on women’s issues. I know you have some projects in that respect. Could you elaborate?

Working in Silicon Valley, there were almost no other women. I just thought it was so strange because I had just come from Harvard University that was majority women. Where did all the women go? It's very hard in the United States for women to raise money for their business. Of all of the venture capital that goes to startups in the United States, 5 percent of it goes to women. So, the majority of my investments and advising are around female entrepreneurs. I hope in turn that those women go on to hire more women and invest in other women. In America, Randi is a name for men usually, which actually was an advantage for me because if I'm emailing with someone and they don't see me, they think they're emailing with a guy and are more open to doing business. That's very sad to say, but I think that's still the position a lot of women around the world find themselves in.

Gender issues are developing into political issues in Korea.

There's always going to be some people that don't want change to happen. But, I'm sorry for them. I think the change is already happening. You can either get on the train, or just shout from the station.

What attitudes should female entrepreneurs take on?


I think emerging technology is a great opportunity for women. Things like NFT, blockchain and crypto are brand new, so we don't have to fight to catch up. Everyone starts at the same place. I'm really excited because I hope with this SPV, we can fund and work with women that are going to get into some of these groundbreaking spaces.