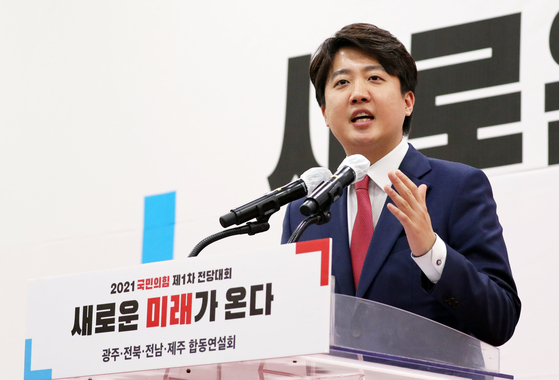 Lee Jun-seok, the frontrunner of the People Power Party's chairmanship race, gives a speech on Sunday at the party's joint speech session in Gwangju. [NEWS1]

Among the PPP supporters and those with no supporting party. Lee scored 43.8 percent, Na 25.9 percent and Joo 7.8 percent.

Lee, at 36 years old, was ranked at the top in all age groups and for both genders.

The survey, conducted on Saturday, has a confidence level of 95 percent and a margin of error of plus or minus 3.1 percentage points.

The PPP will hold the national convention on June 11 to elect the new chairman, who will oversee the party in the crucial final months before the next presidential election in March 2022. For the chairmanship election, the party will conduct two sets of opinion polls, on June 9 and 10. The survey of the party members will count for 70 percent and the general public for 30 percent.

In his interview with CBS Radio on Monday, Lee made clear that his goal, as the party chairman, will be ensuring the PPP's presidential victory. "The chairmanship can be a poisoned chalice for me," Lee said. "If I become a chairman but fail to bring a presidential victory to the PPP, I will have to retire from politics early."

In another opinion poll released by the Korea Society Opinion Institute on Monday, Lee also came out on top with a score more than twice that of runner-up Na.

He scored 39.8 percent while Na followed with 17 percent. Joo scored 3.4 percent, Hong 3.2 percent and Cho 2.4 percent. According to the poll, conducted on Friday and Saturday, 26.2 percent said they see no suitable candidate to chair the PPP.

The poll had a confidence level of 95 percent and the margin of error was plus or minus 3.1 percentage points.

Lee currently holds no official leadership title in the PPP. The Harvard graduate started his political career in 2011 by joining the Saenuri Party, a predecessor of the PPP, when he was a young entrepreneur. Lee has no experience of winning any election, including a lawmaker seat.

Although he was recruited by former President Park Geun-hye when she was the Saenuri leader, Lee has kept his distance from her since her 2016 abuse of power and corruption scandal.

Lee's campaign announced Monday that he has ended the fundraising activity after receiving over 149.2 million won ($134,600) in three days. Under the law governing political funds, a chairmanship candidate is allowed to raise only up to 150 million won.

Only seven people contributed amounts over 3 million won. According to the law, names of the supporters who donated 3 million won or more to a political campaign will be made public.

It is rare for a conservative politician to receive small amounts of contributions from many voters, rather than big checks from a few. The changed fundraising trend indicates a generational change in the conservative party.

Meanwhile, a presidential aide said Monday that President Moon Jae-in will meet with the group of first-term lawmakers of the ruling Democratic Party (DP) in response to the growing prospect that Lee will become the new opposition leader.

"Lee is putting up a good fight in the PPP's chairmanship race, indicating that a generational change is taking place," the aide told the JoongAng Ilbo. "We believe it is important for the president to listen to the first-term lawmakers' opinions in such a situation."