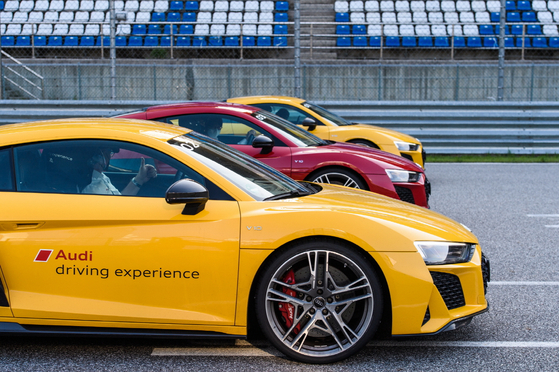 INJE, Gangwon – While electric vehicles (EVs) are all the rage these days, there is still one place where internal-combustion-engine vehicles still rule: on the race track.

Audi recently allowed the press and customers to compare and contrast at the Inje Speedium in Gangwon, making available a number of EVs and traditionally-powered vehicles through the Audi Driving Experience event. It proved that on speed tracks, sports cars with monstrous internal-combustion engines offers thrills EVs just can’t match.

In terms of internal-combustion-powered cars, the German company brought the RS 6 Avante, RS 7 Sportback, RS Q8, S6, S7 and S8. For EVs, it was the RS e-tron GT and the e-tron.

The highlight of the event was a five-lap drive around the 2.5-kilometer (1.55 mile) speed track in the R8 V10 Performance, Audi's fastest car, which has been available in Korea since February.

Topped with a 5.2-liter (318-cubic-inch), 10-cylinder gasoline engine, this born-to-race model peaks at 610 horsepower and 8,100 RPM. The powerful engine is shared with Lamborghini's Huracan.

The bucket seat and the on-button smack in the center of the steering wheel signals that this is not your typical family runabout. 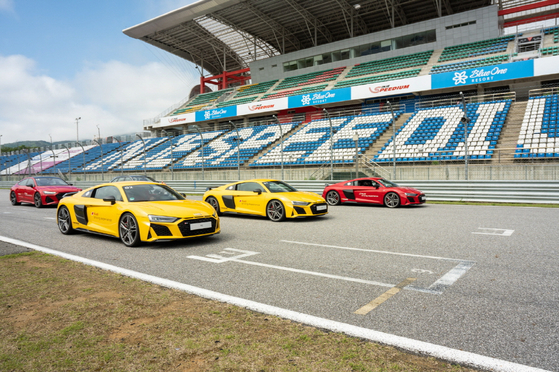 Although the first part of the test drive was done in Comfort driving mode, the R8 was agile and fast enough. Under the Dynamic mode, the acceleration and the engine's rumble go to another level. The R8 V10 broke 180 kilometers per hour with ease, and the RPMs were up there, at about 8,000.

An Audi instructor sniffed that this was only half of what the car can do.

With the engine in the stern, cornering was tight, even through a hairpin.

Numerous carmakers in Korea have offered test drives on race tracks - either sports cars or just ordinary cars with high performance features - but none have provided a driving experience as mind-blowing as that offered by the R8 V10. No hesitation was needed accelerating, braking or cornering because the car gives the driver the confidence that the engineering will work.

Audi Korea tracked the heartbeats of the drivers, and this reporter's raced up to 140 beats-per-minute (BPM) when the car was accelerating, up from the 80-BPM range.

There was also opportunity to ride in the back seat of the RS e-tron GT, the high-performance version of Audi's pure-electric e-tron GT sedan, which is slated for the Korean market this year.

Its maximum horsepower translates to 598, and it can reach the speed of 100 kilometers per hour under 3.3 seconds. The numbers are impressive, but weighing in 180 kilograms more than the R8 V10, the car just didn’t have the pep of the old-school counterparts.

The suspension felt a bit stiff as the car wound over the hills and through the curves. 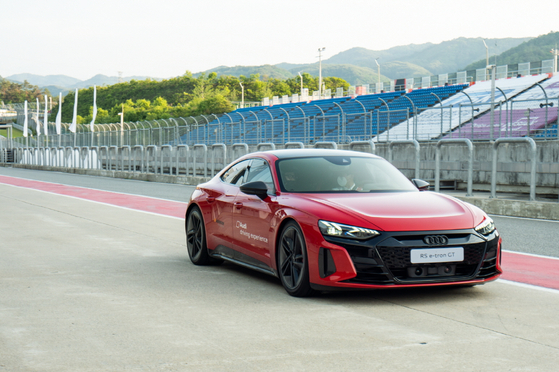