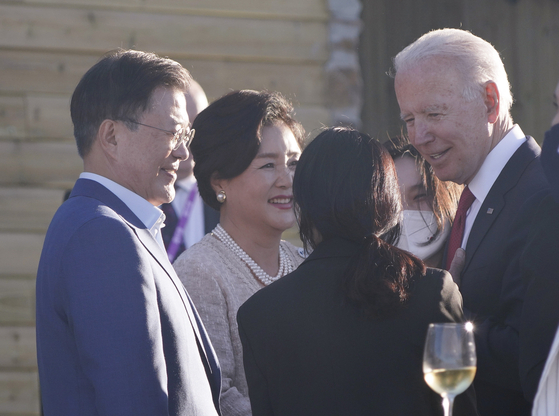 President Moon Jae-in, left, and his wife, Kim Jung-wook, second from left, talk to U.S. President Joe Biden, right, before a dinner at the Group of Seven summit in Cornwall, England, on Saturday. [YONHAP]


President Moon Jae-in signed a statement along with other world leaders calling for human rights and democratic rule of law -- becoming part of Washington's attempt to contain the rise of China.

Moon was invited as one of four outside guests to a Group of Seven (G7) summit in Cornwall, England, which ended Sunday with the release of two statements: the Summit Communique signed by G7 leaders, and an Open Societies Statement signed by all the leaders.

According to the latter, the leaders agreed to “reaffirm [their] shared belief in open societies, democratic values and multilateralism as foundations for dignity, opportunity and prosperity for all and for the responsible stewardship of our planet.”

They said it was imperative to reaffirm the values that bind their democracies together: respect for international rules and norms relating to human rights for all, democracy, social inclusion, freedom of expression, the rule of law and an effective multilateral system.

While the G7 Summit Communique directly scolded China for human rights infringements in its Xinjiang region, called for Hong Kong to keep its autonomy and demanded a thorough investigation into the origins of the coronavirus, the Open Societies Statement had no direct mention of China.

But it was seen as pressure on Beijing from a coalition of world’s richest democracies led by the United States and President Joe Biden.

A senior Moon administration official on Sunday denied that the delicate balance Seoul was trying to maintain between Washington and Beijing was disturbed.

“The statement included nothing that targets a particular country,” the official said during a briefing to reporters aboard the presidential plane heading to Austria, Moon’s next stop.

“The statement was intended for countries with democratic leaderships to work together in order to resolve the challenges that the world is mutually confronting right now,” he said.

He said Korea did not participate at all in the G7 Summit Communique, which contained a strong rebuke of China. “Guest countries didn’t participate in the draft process nor signed it,” he said.

No discussion took place during the summit that the G7 be expanded to include more countries such as Korea, Australia, India or South Africa, he said -- the four countries invited as guests -- denying an earlier media report that Japan protested such an expansion.

In a phone conversation, Chinese Foreign Minister Yang Yi told his Korea counterpart, Chung Eui-yong, that Seoul and Beijing should not allow their relations to be pushed off track by Washington's strategy in the so-called Indo-Pacific region, a statement released by the Chinese Foreign Ministry said.

"As friendly neighbors and strategic partners, China and the Republic of Korea should know well the rights and wrongs, stick to the correct position, abide by political consensus and never be misled," Wang was quoted as telling Chung.

It was Beijing's second complaint in less than a month. China expressed concerns last month after a joint statement adopted after Moon’s summit with Biden on May 21 addressed the "importance of preserving peace and stability in the Taiwan Strait” and called for the "freedom of navigation and overflight in the South China Sea."

China on Sunday condemned the U.S. campaign to contain it at the G7 summit.

"The days when global decisions were dictated by a small group of countries are long gone," a spokesman for the Chinese embassy in London said in a statement.

The G7 Summit Communique also addressed the North Korean nuclear issue. “We call for the complete denuclearization of the Korean peninsula and the verifiable and irreversible abandonment of the Democratic People’s Republic of Korea’s [DPRK] unlawful weapons of mass destruction and ballistic missile programs in accordance with all relevant UN Security Council resolutions,” the G7 leaders said.

“We call on all states to fully implement these resolutions and their associated sanctions,” they continued. “We welcome the readiness of the United States to continue its diplomatic efforts in coordination with all relevant partners and call on the DPRK to engage and resume dialogue. We once again call on DPRK to respect human rights for all and to resolve the issue of abductions immediately.”

The G7 stance is far more straightforward and stronger that the position in the joint statement from the Moon-Biden summit. While the Korea-U.S. statement only called for denuclearization of the peninsula, the G7 communique demanded the North give up its nuclear programs in a verifiable and irreversible manner.

The G7 leaders also made clear that all “states” should implement UN sanctions against the North. “It is a clear message to China and Russia," Shin Beom-chul, director of the Center of Diplomacy and National Security at the Research Institute for Economy and Society, told the JoongAng Ilbo. “China, in particular, is the key in the message that urges sanctions implementation.” 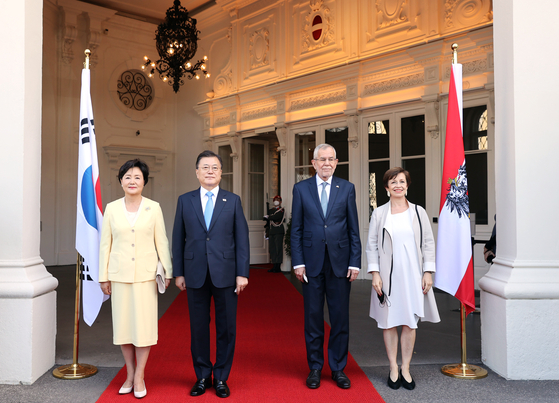 
Meanwhile, Moon arrived in Vienna on Sunday to start a three day-visit. He was the first Korean president to visit the country since the two nations established diplomatic relations in 1892.

Moon is scheduled to have meetings on Monday with President Alexander Van der Bellen and Chancellor Sebastian Kurz to discuss efforts to improve bilateral ties. Kurz visited Korea in 2019.