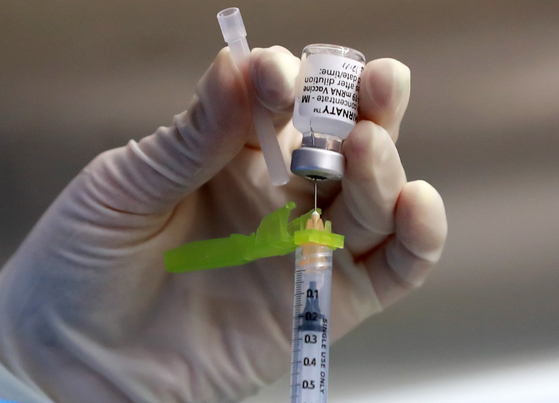 A medical staff prepares for a Pfizer jab. [NEWS1]


A healthy soldier in his 20s died Sunday, six days after receiving a Pfizer Covid-19 vaccine, and authorities will investigate any correlation between his death and the vaccine.

According to the Army, a soldier from an army unit based in Seoul was found unconscious in the military barracks on Sunday morning and was rushed to a nearby hospital after emergency measures, but died.

Inoculations for soldiers under the age of 30 started with Pfizer jabs at military medical institutions from June 7, and the soldier received the shot on that day.

Military and health authorities conducted an autopsy at the Armed Forces Capital Hospital on Monday morning to find the cause of death, but results will take longer to come out, a military official said.

“Seeing that [the soldier] was young and did not have any special underlying disease, the results of the autopsy could be an important basis for the conclusion,” Park Young-joon, head of the abnormal response investigation team at the Korea Disease Control and Prevention Agency (KDCA), said in a briefing on Friday.

"When the results are confirmed, the Vaccination Damage Investigation Team will evaluate and review the causality,” Park added.

This is the second death of a military troop member following Covid-19 vaccination.

Last month, an Air Force non-commissioned officer in his 40s was declared brain-dead seven days after receiving the second shot of the AstraZeneca vaccine, and died three days later.

It was not determined whether the vaccine was related to the officer's death as the relatives of the victim declined an autopsy.