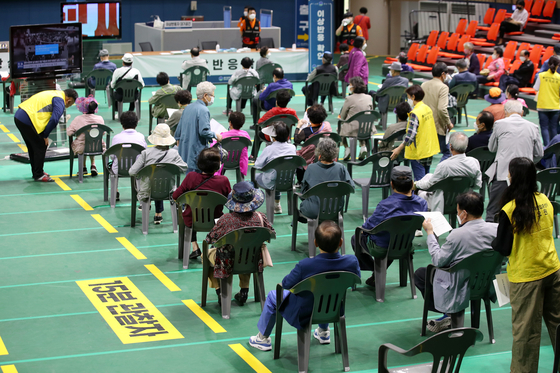 People aged 75 and over wait for possible adverse reactions after receiving Pfizer shots at a Covid-19 vaccination center in Gwangju, South Jeolla, on Monday. The first round of Pfizer vaccinations resumed on May 22 after a temporary suspension due to a supply shortage. [YONHAP]


Deaths following Pfizer jabs are exceeding those after AstraZeneca shots, although experts say that many of the casualties were over the age of 74, with weaker immune systems and pre-existing medical conditions.

Since the vaccination program began on Feb. 26, a total of 153 cases of death after inoculation had been reported as of Monday, according to the Korea Disease Control and Prevention Agency (KDCA). Pfizer accounted for 93 cases and AstraZeneca 60.

Enthusiasm for the shots isn't high. As of Monday, the booking rate for Covid-19 vaccinations — the percentage of people in an age group who have made reservations — was only 55.9 percent among people aged 60 to 74, who are eligible for the AstraZeneca vaccine. The booking rate for people between the ages of 60 to 64 was only 47.4 percent.

Health Minister Kwon Deok-cheol said in a recent briefing that “the reservation rate is slowing,” and urged the elderly to participate in the vaccination campaign.

Deaths have been reported among elderly without underlying diseases after they received Pfizer shots.

Last Thursday, an 81-year-old man in Sokcho, Gangwon Province, died six days after getting his second Pfizer shot, and an epidemiological investigation is underway to find any causality. The man did not have any underlying diseases, and did not show any adverse reaction after the inoculation.

In Gwangju, an 81-year-old woman died an hour and 18 minutes after receiving the second Pfizer shot on May 12.

Two minutes after her second shot, she lost consciousness and showed signs of anaphylaxis, or severe allergic reaction. In a preliminary examination, she was said to have no underlying disease.

Health authorities, however, explained that none of the deaths reported so far are related to the vaccinations.

“On the elderly without underlying diseases who died after inoculation, we could find the causes of death through an autopsy, such as cardiac infarction, heart rupture or pulmonary embolism,” an official from the KDCA told the Korea JoongAng Daily.

“We don’t think there is a meaningful difference [between AstraZeneca and Pfizer in terms of deaths] seeing the situations abroad,” the official added.

For example, in the U.K. where a larger number of inoculations have being done, there were 3.19 deaths per 100,000 people for Pfizer, and 3.29 for AstraZeneca.

“As the Pfizer vaccine is being administered to people over 74 years old, the number of deaths tends to be higher than AstraZeneca and makes it more likely that coincidental deaths will occur,” said Kim Woo-joo, a professor of infectious diseases at Korea University Guro Hospital.

“When you see the reports from the KDCA, it says those received the vaccines died of symptoms such as pneumonia or stroke, which do not suddenly occur when vaccinated,” said Chon Eun-mi, a professor of respiratory medicine at Ewha Womans University Mokdong Hospital.

“Many of the very elderly people cannot feel when they have symptoms because their body functions poorly,” Chon said. “The vaccine triggers underlying symptoms that they weren’t aware of, causing death.”

Chon advised people over 74 to get a check-up before being vaccinated.

A survey conducted by the Asan Medical Center on adverse reactions to vaccines in healthcare workers aged between 20 to 69 showed that vaccine-associated adverse reactions were more commonly reported after AstraZeneca shots (93.3 percent) than Pfizer (80.1 percent).

Recently, cases of heart inflammation among young people after receiving the Pfizer vaccine have been reported overseas — in the U.S. and Israel — though no firm conclusions have been reached.

The KDCA announced on Monday that the first batch of 55,000 doses of the Moderna vaccine will arrive on May 31. This is part of a 40 million-dose contract signed with Moderna.

Moderna announced last December 31 that it would ship its first batch in May, saying that it had signed a supply contract with Korea for 20 million people.

"It will take time to use because it needs final permission from the Ministry of Food and Drug Safety,” said Sohn Young-rae, a senior health official of the Central Disaster and Safety Countermeasure Headquarters, during an online briefing on Monday.

The Ministry of Food and Drug Safety approved the use of the vaccine but only after submitting a final report on clinical trials.

Moderna’s vaccine, based on messenger RNA, was the fourth Covid-19 vaccine to be approved after AstraZeneca, Pfizer and Janssen. Korea approved the Moderna vaccine on May 21 on the condition that the company submit the final outcome of its clinical studies. 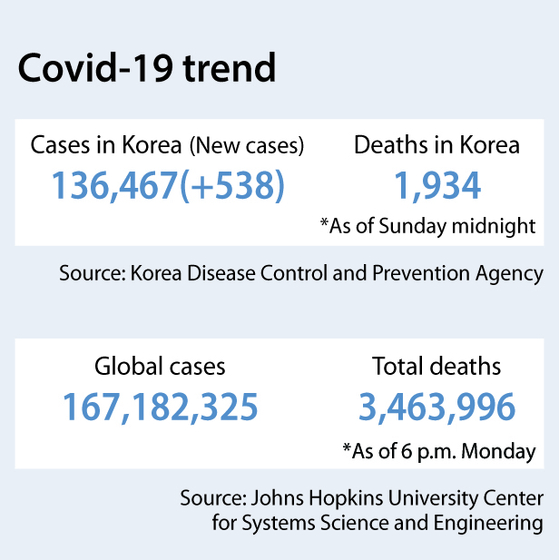