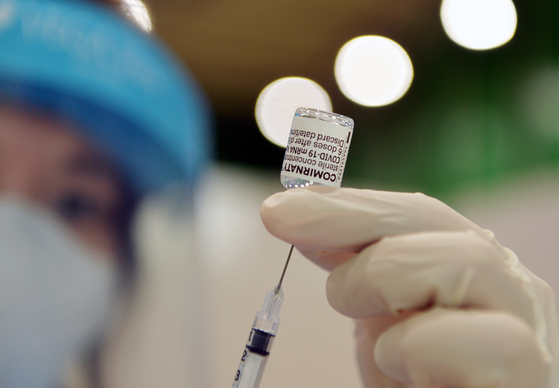 A nurse loads a syringe with the Pfizer Covid-19 vaccine. [KIM SEONG-TAE]


A healthy man in his mid-30s had a bad reaction to his first dose of the Pfizer Covid-19 vaccine and ended up dying when his heart gave out Sunday.

Authorities will investigate any correlation between his death and the vaccine.

According to the public health center of Gwangsan District in Gwangju, a man in his mid-30s who was on extracorporeal membrane oxygenation (ECMO) for adverse reactions to the vaccine was pronounced dead Sunday afternoon.

The man got the first dose of the Pfizer vaccine on Aug. 30. He soon felt side effects such as chest pain and difficulties breathing, and visited a general hospital near his house the next day.

The medical staff didn’t find any special problems during a clinical test and advised him to return home, although they prescribed some medicine. The man had no underlying disease, and had felt no side effects from other types of vaccines.

When his symptoms did not improve the following day, he revisited the hospital and was hospitalized.

During hospitalization, he fell into coma and was transferred to a bigger university hospital in the city on Sept. 7.

The man was put on ECMO and a respirator, but eventually died 13 days after his inoculation.

The official cause of death was dilated cardiomyopathy — a weakened and enlarged heart that cannot pump blood effectively.

Inflammation of the heart or its lining called myocarditis and pericarditis are known side effects that can be reported after mRNA vaccines like Pfizer or Moderna.

The family of the deceased man requested an autopsy.

As of Monday, the Korea Disease Control and Prevention Agency (KDCA) received a total of 598 reports of fatalities after vaccinations, but only two cases have been officially acknowledged as vaccine-caused deaths.