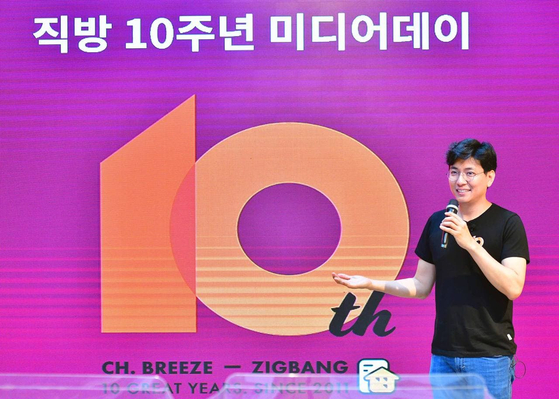 
After a decade as Korea’s largest real estate listings app, Zigbang is revamping its business to become a one-stop shop for real estate transactions — from virtually walking through apartments to signing real contracts.

Until recently, Zigbang sold slots on its mobile app to real estate agencies offering properties for rent or sale. Real estate agencies could post photos of property — predominantly small one-room or two-room units that appeal to younger tenants — in exchange for advertising fees.

Within the app, users could choose what kind of property they were looking for — a smaller unit or an apartment — and then explore all available listings on an interactive map.

In celebration of its 10-year anniversary, Zigbang announced it is expanding its online service to incorporate transactions and housing maintenance. Instead of handling it all in-house, its main strategy is to work with external partners, hence the name of this new business model: “On-tact partners.”

The company plans to work with real estate agents to split the brokerage fee if a purchase deal is made inside the mobile app — a big step forward from its previous role as an advertising board.

Zigbang CEO Ahn Sung-woo explained the company’s goal is to play a bigger role in tackling a problem that’s been raised among its users for a long time: False information and overlapping deals as multiple real estate agencies promote the same property.

“Customer wanted more than an ad platform — they wanted real information and a responsible service provider that can cover the damage if something goes wrong,” said Ahn during a press conference Tuesday.

The company will partner with real estate offices and licensed individual agents that want to start a business of their own. Zigbang will offer required training sessions to businesses wanting to use their platform. If a transaction made through Zigbang turns out to be fraudulent, the company will provide compensation.

“Realtors and customers can talk online to replace the current practice where every discussion takes place in the office,” said Ahn. “The current system is extremely unproductive. For a lot of offices, it’s difficult to meet more than two customers a day. I believe signing electronic contracts will be possible as well.”

As part of its big goal to take the real estate experience online, the company has mapped almost every apartment in Korea in 3-D.

Zigbang’s app shows the exact location of the apartment — which floor and which building it is in —, a 3-D view from the window, the amount of sunlight its windows take in during the day and a virtual walk-through of the apartment’s interior, including a virtual reality tour, if possible.

Apart from purchasing homes, Zigbang plans to connect users to other related experts, like plumbers, interior designers and electricians. This would complete the platform’s goal to be a one-stop shop that offers everything related to housing, the CEO said.

Although it is not yet released to the public, Ahn also revealed Tuesday that the company is developing a “metaverse” office platform named “Metapolis.” Employees can wander around virtual offices as avatars and engage in meetings and conversations via video. At Zigbang, where all of its employees work from home, the software is already in use.

“The service is still going through internal testing but it was developed to be offered to external companies and provide multiple languages for overseas clients,” said Ahn.

Zigbang said it plans to make the virtual office available for other companies in the near future, but did not specify a date.